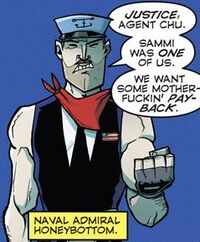 Vice Admiral Honeybottom is a leader for the U.S. Navy. He sent Tony Chu on a dangerous mission when Mike Applebee wanted him dead.[1]

Later, Sammy the Seal was murdered when he uncovered some evidence he was not supposed to on Level E at the Yamapalu sea station. Honeybottom attended the funeral.[2]