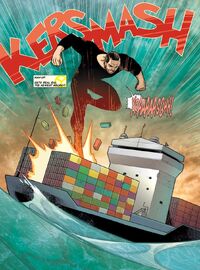 Horatio Megalos is a vigilante who uses the name Man-Up. One night he was supposed to meet Gunner, but he never showed. Since then, Gunner has been on the look out for him. It is later revealed that he was kidnapped and sold as a superhuman weapon to a retired supervillain but was rescued from captivity by Youngblood.