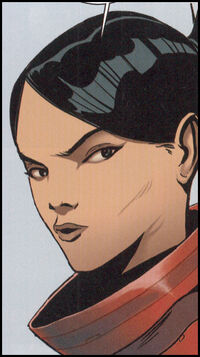 Mao Hu became a follower of the Message and became a member of the Chosen about ten years ago. She led three of the four Horsemen to her sister, Xiaolian, and her baby. Babylon was taken away to a place called the Lair of the Beast and Hu cut off her sister's hands so that she would never be able to hold her baby again.

Retrieved from "https://imagecomics.fandom.com/wiki/Hu_Mao_(East_of_West)?oldid=61216"
Community content is available under CC-BY-SA unless otherwise noted.