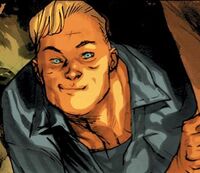 Huck was left in an orphanage when he was just a baby.[1]

When Huck grew older, he began working at a gas station while doing good deeds around his city.[1]

Huck once helped John Clancy clear a tree trunk his tractor could barge. The following day, Huck got up extra early and took the trash out for his entire town. On the Wednesday of that week, Huck went to a drive thru and payed for everyone behind him. On Thursday, Huck rescued a missing fisherman. The town considered him a blessing and rarity the way he helped others. The town was happy to keep him a secret from the rest of the world.[1]

However, on Friday Huck saw a news report reporting 200 schoolgirls in Boko Haram, Nigeria had been kidnapped. Huck flew over and rescued the schoolgirls from the terrorists. He offered them candy and requested the girls keep his identity secret. However, the following day Huck awoke and found his house surrounded by the media.[1]

Retrieved from "https://imagecomics.fandom.com/wiki/Huck_(Huck)?oldid=48741"
Community content is available under CC-BY-SA unless otherwise noted.