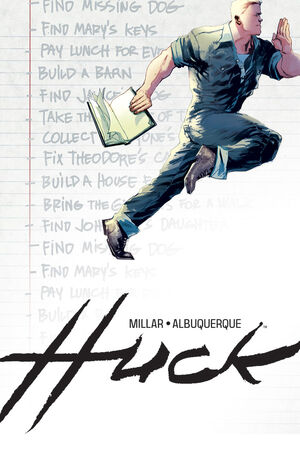 In 1981 somewhere in Siberia, a woman uses her telepathy to detect what a naval captain is looking at one mile below them in the sea. Professor Orlov is impressed with her skills as she is correct.

In the present day in Vermont, news crews surround Huck's home. At a neighbor's home, Ethan stops by for violin lessons. Mrs. Jones, the instructor, causes him to go to sleep by touching his head and mentioned the command, "sleep."

Meanwhile, Mrs. Taylor pushes through a crowd to get into Huck's home. Inside, Huck tries to stay pre-occupied by building a model ship. When he spots a woman out in the crowd looking distressed, against his family's wishes he heads out into the crowd. He forges through the news crews and asks the distressed women if he can help her. She, along with several others in the crowd, ask for Huck's help in finding long-lost loved ones.

Huck travels across the states to find the woman's man. He finds her living with another woman and family. The man becomes worried and suddenly he hears the doorbell ring. He opens the door to find Huck, who has tracked him down.

In Afghanistan, Huck finds several terrorists with one of the woman's husbands who has been taken hostage. He stops the vehicle they are traveling in and frees the man.

Meanwhile in Siberia, Professor Orlov watches the TV broadcast Huck and all of this adventures.

In North Carolina, Huck's brother watches him on TV.

Now under media scrutiny, Huck sets out to help the flood of strangers coming to him in need.[1]

Retrieved from "https://imagecomics.fandom.com/wiki/Huck_Vol_1_2?oldid=68362"
Community content is available under CC-BY-SA unless otherwise noted.