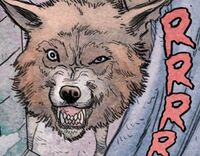 Hungry is a coywolf that Dunn and the late Paul adopted in Nova Scotia.[1]

After Amber was brought to the Two-Four hideout, Dunn had Hungry search Amber for any tracking devices implanted.[1]

When the Two-Four launched their final assault, Dunn died in the process. For his final wishes he asked Les LePage to take care of Hungry, which he begrudgingly accepted.[2]

Retrieved from "https://imagecomics.fandom.com/wiki/Hungry_(We_Stand_on_Guard)?oldid=52089"
Community content is available under CC-BY-SA unless otherwise noted.