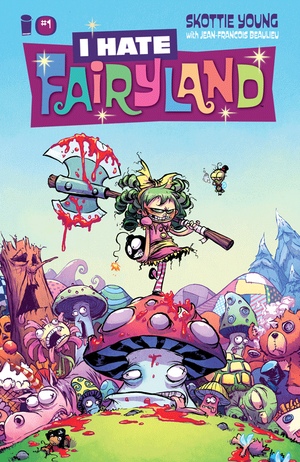 Gertrude is a young girl who wishes for nothing more than to be in a land of magic and fairies. She is suddenly sucked through a portal and thrown into Fairyland. While the world is filled with bright colors and gum drops, she breaks her arm and bruises her body from the fall. She meets Queen Cloudia and tells her she wants to return to her home. Cloudia offers her a map and a personal guide to get her out within a day's time.

However, twenty-seven years later they are still stuck in Fairyland. Gertrude lives a bratty and abrasie life filled with guns and violence. She destroys the High Teller moon when it talks back to her and kills all the stars in the sky as well. She heads to Las Fungas to have a good time. When Lord Slug and his Shroom Patrol attempt to hold her captive, she goes on a rampage strangling him and eating the shrooms. Larry, her assistant, knows her well and is waiting outside a window she he suspects she will fling her body through to escape. Moments later, his believe becomes reality as she jumps through the window while high on shrooms.

Cloudia's patience runs out when she sees the stars fall from the sky and die. Her assistant, Chirpington, reminds her that she cannot harm any guest of Fairyland as the Queen. However, Cloudia says she has some creative ways around the limitation.

Elsewhere, someone hires Bruud the Brutal at a bar to perform a 'job'.

The pig that Larry hired to carry them becomes agitated with Gertrude's psychedelic ramblings. He kicks them off to Ice Cream Island below and says his debt is paid. Larry and Gertrude review a map and suddenly a large shadow looms over them. The man tells them he is there to kill them.

Superstar SKOTTIE YOUNG (Rocket Raccoon, Wizard of Oz) makes his Image debut with an ALL-NEW SERIES! The Adventure Time/Alice in Wonderland-style epic that smashes its cute little face against Tank Girl/Deadpool-esque violent madness has arrived. In an adventure that ain't for the little kiddies, (unless you have super cool parents, then whatever), you'll meet Gert—a six year old girl who has been stuck in the magical world of Fairyland for thirty years and will hack and slash her way through anything to find her way back home. Join Gert and her giant battle-axe on a delightfully blood soaked journey to see who will survive the girl who HATES FAIRYLAND.

Retrieved from "https://imagecomics.fandom.com/wiki/I_Hate_Fairyland_Vol_1_1?oldid=68566"
Community content is available under CC-BY-SA unless otherwise noted.