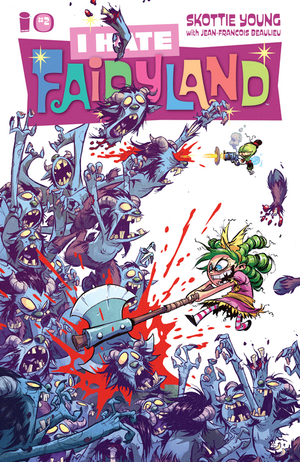 Alright, boys, who wants to try and eat some of this

Gertrude drinks away her problems at a bar with the beheaded Bruud the Brutal sitting next to her at the bar. She chases away several patrons by pretending that the decapitated head could talk and the bartender finally steps in and tells he she needs to be cut off. When she wishes she didn't look like small girl, her outside appearance suddenly changes to that of a large puffed up person. Larry tells her that's what happens when you eat nothing like sugar in Fairyland.

Elsewhere, Queen Cloudia announces how disappointed she is that Bruud failed to kill Gertrude. She takes Sir Nimbus to the basement where they summon Horribella. They request that she kill Gertrude.

Later, Horribella heads to Faun Valley. She tricks a faun into eating tainted food. He turns into a mindless zombie and heads off towards a nearby village.

Meanwhile, Larry and Gertrude continue to stumble through the land killing Giggle Giants as they thought the key for Gertrude to return home was there. Larry tells them they need to take a break and head to local tavern. However, upon arriving they find hundreds of thousands of mindless faun zombies waiting for them and they are quickly surrounded.

Does Gert die by the axe of her assassin, Bruud The Brutal? Spoiler: Probably not.

Retrieved from "https://imagecomics.fandom.com/wiki/I_Hate_Fairyland_Vol_1_2?oldid=68567"
Community content is available under CC-BY-SA unless otherwise noted.