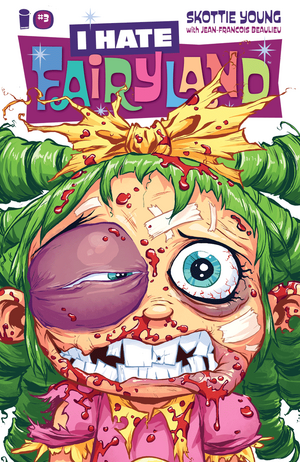 Larry, shut your maggoty mouth. I'm trying to slo-mo away from this explosion and you're killing my vibe.

Gertrude finishes her rampage and kills all of the Faun Zombies that surrounded her, including the new narrator of the story. Since they are undead, she has Larry Wentsworth III pull out a Scortchling from his hate to burn their bodies to ensure they won't return.

Meanwhile at Queen Cloudia's Castle, Queen Cloudia scolds Horribella for failing to kill Gertrude. She decides to speak with the council. She heads out and meets with Barque. After naming the secret password, "Pizza" she's allowed passage through his mouth to meet with the Council of Elders. They devise a plan to bring a new child to Fairyland. If she finds a key first, then Gertrude will become a permanent resident. Of which, she can harm residents while she is forbidden to harm guests.

Meanwhile, Gertrude terrorizes centaurs and steals horns from their heads. While fleeing, she falls down a ravine and hits her head. She sleeps for many months. Larry watches over her, starts a family, and they leave him all in the time that she wakes up.

After much time has passed, Gertrude wakes up when she hears singing. She sees Happy has arrived and is a new guest in Fairyland. She attempts to kill her but is struck by Happy's rainbow projectile and flies backwards. When Larry finds her, he can see her body lays broken and bruised against a tree.

Queen Cloudia is forced to bend the rules of Fairyland in hopes to rid their world of Gert once and for all.

Retrieved from "https://imagecomics.fandom.com/wiki/I_Hate_Fairyland_Vol_1_3?oldid=68568"
Community content is available under CC-BY-SA unless otherwise noted.