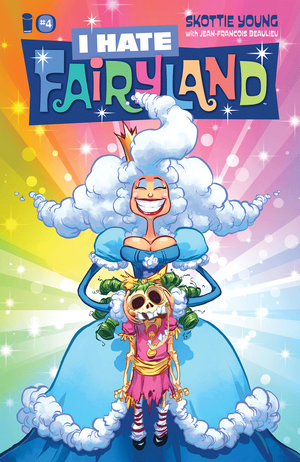 Gotcha, you're an evil poet with control issues.

A narrator begins to tell the story when Larry blows his brains out with a gun and finishes the story.

Gertrude is alive after being assaulted by Happy[1] Larry blows his cigar on her which fixes her back to health, and he pulls out the Vanity Gate which allows Gertrude to teleport to a mirror world.

Once there, she pulls Queen Cloudia in to complain to. Cloudia uncharacteristically loses her temper and shouts at Gertrude. As she leaves, she gives her a passive warning that Happy will find the key first. Larry looks at the rule book after she leaves and realizes there's a danger that Gertrude could become a permanent resident if that happens, and thus become vulnerable to Queen Cloudia. Larry proposes they meet with the Seven Evil Dooms.

Meanwhile, Happy blows through the challenges as everyone helps her while Gertrude struggles and is fought at each step of the way.

Gertrude enters the castle and meets Darketh Deaddeath, one of the Seven Evil Dooms. She asks if she can borrow his powers, and he quickly responds yes. They are shocked it was so easy, but then he reveals they must survive his dungeon to prove themselves worthy as they plummet to the bottom and are confronted by a scary monster.

Gert finally has a face to face with Queen Cloudia. Will it she leave with her face, or will it be blasted of her rotten skull by the Queen?

Retrieved from "https://imagecomics.fandom.com/wiki/I_Hate_Fairyland_Vol_1_4?oldid=68569"
Community content is available under CC-BY-SA unless otherwise noted.