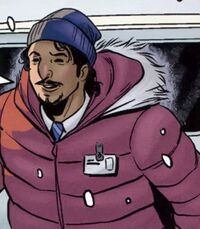 Ibrahami Ramin grew up with two devout Muslim parents.[1] He studied Biology in school and eventually started working for the Centers for Disease Control and Prevention. He was sent to Wisconsin by the CDC to help investigate Revival Day.[2]

After a revivor, Arlene Dittman was sent to the morgue, he found a wealth of information as his first Reviver case. However, while being examined in the morgue, Arlene Dittman suddenly came back to life and escaped.[3] Later, Dana Cypress began flirting with Ramin at a bar, not knowing his job. As they were hooking up in the car, she received a call and had to go.[3] The next day, the two were called into a meeting together and introduced as new partners. Ramin informed them of his discovery with Arlene Dittman. He believed that the Reviver strain wasn't contagious and wouldn't spread. When they left the meeting, Dana berated Ramin and told him they will never work out.[4]

Ramin was later summoned to a funeral home which had recently blown up due to Arlene Dittman. Her body was examined by Randy the Mortician and Ramin again. They found she had burned not only on the outside, but also on the inside.[1] Ramin suddenly received a call from Ami, a CDC employee, to warn him that people were talking about creating an intermittent camp for Revivers to be relocated.[5]

The next day, Sheriff Wayne delivered the news to the RCAT that they were going to focus on catering to the IRS. They were investigating the Revivers and their tax return status instead of focusing on finding the recent Reviver killer Anders Hine.[6]

The next day, Ramin was tasked with investigating Edmund Holt's Home. Mayor Ken Dillisch reassigned him. Ramin got his foot stuck in a bear trap. The racist Edmund Holt stepped towards him with a gun. Surprisingly, he attempted to help by releasing the bear trap.[7] Ramin was taken to hospital.[8]

Ramin heads to a religious place per Ami's request [9] before giong on a double date with Bonnie, Lester and Dana.[10]

Later, Ramin heads to the new CDC disposal facility with Wayne. Wayne asks Ramin if he thinks Dillisch is using the government confiscation of animals as a cover-up. Suddenly, They are nearly run over by a forklift sent to smash them. A suit explodes with cow guts inside sending the two a message to watch their step.[11]

Ramin helped receive U.S. Food and Drug Administration specialist Tony Chu to Wausau. Together they investigated a case where a group sneaked body parts into the quarantine zone. They investigated a restaurant that turned around to five-star quality food overnight. They uncovered the man had food powers allowing him to use a chopped of chef's hand to help him cook. Em Cypress helped take him down.[12]

Later, the group met up again when bodies were being exhumed from graves. They tracked the bodies to a one-room classroom on the southern tip of the quarantine zone. Inside, a woman Reviver was reliving her classroom days by ripping off her flesh and having the exhumed bodies revived. Tony had learned the secret of the Creeps and lured on to enter the woman's body causing her to self-immolate and burn the facility to the ground. The heroes escaped and headed to the local bar to drink and talk about their issues before Tony left town to head back to Philadelphia.[12]

Retrieved from "https://imagecomics.fandom.com/wiki/Ibrahaim_Ramin_(Revival)?oldid=62009"
Community content is available under CC-BY-SA unless otherwise noted.