"The Curse of Spawn" 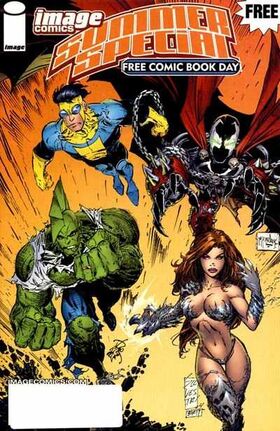 I'm not going to let you hurt anybody! THIS ENDS NOW!!

Appearing in "The Curse of Spawn"

Plot Synopsis for "The Curse of Spawn"

A retelling of the events of Spawn's life.

A villain targets Sara Pezzini, Lara Croft and Strykeforce as a first strike.

Cecil Stedman yells "Go!". He's apparently talking to Invincible who flies in to fight the villain Furnace. Mark makes quick work of the villain and flies back to school where he tries to sneak back into class without being seen but is caught by Principal Winslow.

Principal Winslow brings him into is office and lectures him about his poor attendance and dropping grades. He's trying to be understanding about Mark's dad dying in the car crash but he expects more out of Mark. While he's saying this, Mark is picturing scenes of the truth as we see flashes of Nolan beating him up before flying away.

After school Amber catches up with Mark and asks if he wants to study together that night. Mark says that he can't because he doesn't want to leave his mom alone.

Mark heads home and talks to his mom and is worried that he's not sure he's ever going to get over what his dad did to them.

Dragon and his wife are enjoying a movie in their living room when a super-freak comes bursting through the wall and attacks. Jennifer watches on helplessly as Dragon is momentarily punched into another room and the Brutalizer closes in on her. Dragon rejoins the fight to protect Jennifer and attempts to learn the reason behind this invasion, only to be met with silence.

As the battle continues, the Brutalizer eventually reveals that he had been sent by the Vicious Circle to prove to the hero that the criminal organization has not been destroyed. They will rise up once more and Dragon will pay for his actions against them. Brutalizer is punched high up into the air to end his threat before Dragon turns his attention to comforting a panicking Jennifer.

Jennifer is not sure if she will ever really feel safe again now that she has lost her super-powers and does not want to get used to this handicap, she wants her abilities back. Dragon does his best to make her feel better, offering to have Rex Dexter build a security system to guard their house. Jennifer is then alarmed to notice that her husband is still bleeding from a minor cut on his lip, indicating that Dragon’s healing factor was removed by the touch of Negate…

This issue includes an introduction by Erik Larsen.