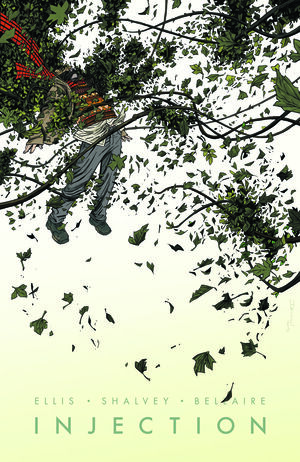 In Dublin Brigid Roth leaves the facility and receives a phone call. When she learns Simeon Winters is heading to the airport to meet her she throws her stuff in the van and heads out.

In Liddington, Robin Morel speaks with Maria Kilbride about what she saw in the research facility.[1] He tells her it sounds like ancient folklore of Spriggans. Maria tells him that doesn't sound like another case of feral distributed intelligence bent on destroying the world. Robin tells her that Spriggins aren't nice and are known for leading people astray with music. He wonders if any of the rocks would resonate with the sound and that's what triggered the event. He wonders if the Injection also made the connection and is using the folklore facade to lure people in. If that were true, he thinks the missing persons Maria is looking for has fallen under control of the Injection. Suddenly his room transforms into the Other World. Robin tells her to find the guy and have him turn his coat inside out, a rule from the local folklore, and it would break the Injections control on the man. He tells her Injection can't create new rules, only use old lore. He tells her to pull out the kit he made for her. As he hangs up the phone, a vision of a large tree creature leans towards him. He mutters that it's not real and a flash of bright light engulfs the Other World.

At Sawlung Hospital, Dispatch meets with Maria and asks for an update to report back to Control. Maria tells her the missing people are most likely under the control of something. She tells them they'll most likely be hiding in a dark corner or some place associated with death. She tells Dispatch that the men experimented with a rock that then used the sonics to alter their brain patterns as music is known to influence. She tells her that this could be the origin of Spriggans, people hallucinating due to the sonic-reactive rocks. She then warns her that if that is not the case, the FPI should destroy the building. Maria leaves to grab the Electric Asthame.

Years ago, Simeon revealed to the group he was a double agent and knew about cunning-man and Breaker's Yard. Robin asked how he knew and Sim reveals he's actually a secret agent. Brigid tells everyone she's a hacker and Vivek Headland tells them he's a logician. 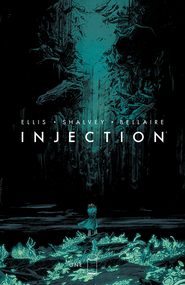 Retrieved from "https://imagecomics.fandom.com/wiki/Injection_Vol_1_3?oldid=68608"
Community content is available under CC-BY-SA unless otherwise noted.