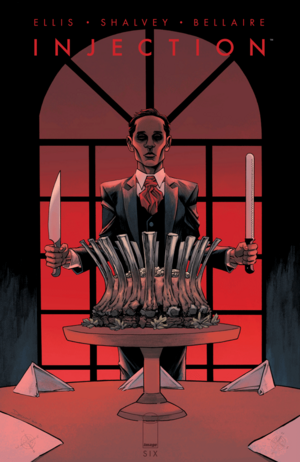 Education is the art of making man ethical.

In his mansion in Manhattan, Vivek Headland wakes up and prepares for the day. He mistreats Red, his butler, as he prepares to meet John Van Der Zee. He bosses Red to retrieve sandwiches for them without lichen.

In the kitchen, Red complains about his boss. The other chef reminds him that he has now had two years longer than if he hadn't met the boss. Red has a flashback to being in a military situation where he was flanked by Headland who offered him a chance to serve under him as he was in need of a man with skills, or die. Knowing his employer would kill him anyways at this point, he accepted.

In the human room, John Van Der Zee requests Headland's help in finding his wife. She died and her spirit was stolen he claims. Her spirit had been visiting him each week and he had a single photo of her. When the photo disappeared one day, her spirit also stopped visiting him. John showed Headland the other photo he had of her, which was of her, John, and his son, also recently departed. He says he knows he has connections with Maria Kilbride and Robin Morel, and wants their help in solving the case.

Red brings out a ham and cheese sandwich. As he bites into the sandwich, Headland immediately stands up, excuses himself, and rushes to the kitchen. He orders the chef to unpack the ham and they find a symbol on the ham. He realizes it isn't ham, but human meat and they've been compromised. The chef is surprised that he has tasted human meat before and Headland tells him it's part of complete life.

Headland meets Detective Branch and Diaz outside a deli. He tells them the meet belongs to the son of a new client, John Van Der Zee. He has a vision of the man throwing a knife at Detective Branch. He plucks the blade out of mid-air and the police arrest the man.

Retrieved from "https://imagecomics.fandom.com/wiki/Injection_Vol_1_6?oldid=55472"
Community content is available under CC-BY-SA unless otherwise noted.