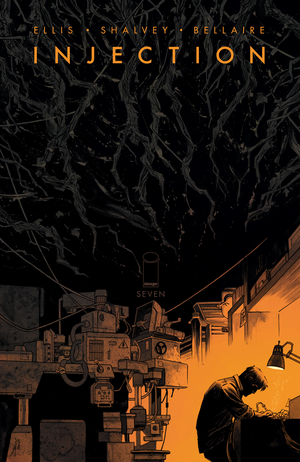 We are all collaborators with the armies of the world, Red.

Detective Lucy Branch takes off after the Deli manager. He attempts to pull up a gun in the kitchen but she shoots him through the arm and apprehends him. Vivek Headland follows in and asks that his Confidential Informant contract be enacted so he can take the man. Branch quickly agrees and lets Vivek take the man.

As Vivek and Red leave the building, Vivek explains he has CI contracts with most agencies in the city and several others. Vivek calls Robin Morel on the phone. He asks if Robin has accepted the job with Breaker's Yard yet. Robin tells him he's not going to accept the offer while Vivek pushes him to accept it. He changes the subject and asks Robin about the picture haunting case and Robin tells him he's sick of doing the 'Scooby-doo' cases. Vivek tells him he should join the Breaker's Yard and then get paid for it. Robin realizes Vivek just wants another in to Breaker's Yard as he has no contacts with that secret agency. Vivek reminds him that Breaker's Yard needs him and that he could reshape how the office works.

They hang up and Vivek quickly calls Maria Kilbride. He tells her about the picture haunting ghost as well. Maria tells him about the recent experience with the Injection. Vivek finds it fascinating and tells her he'd be willing to purchase the report. He then asks Maria to offer a job to Robin at Cursus. She's shocked and asks why. He tells her an offer from Cursus would put pressure on Breaker's Yard to sweeten the deal. He tells her that if the Injection is increasing it's activity, it would not be bad if Robin joined Breaker's Yard and have more resources available to him.

Later, Vivek arrives to the interrogation room with the Deli manager. After Diaz and Branch are unable to get info, Vivek interrupts and quickly tells the man how much he knows about him, and the office he works for, Rubedo. He calls out how Rubedo will torture and mutilate him for talking. The man quickly gives in and tells them the information they want. He explains John Van Der Zee is a member of The Working. Vivek and Branch leave the room. Branch tells him she'll get the paperwork started to get him a plea deal.

Vivek leaves and heads to Van Der Zee's home. It's gigantic and filled with frivolous items. He investigates the safe that the picture of his wife was stored in. He pulls out advanced tools and detects an electromagnetic spectrum trail. He thinks he's the first person ever to find ectoplasm vaginal fluid as he takes fluid samples of a strange liquid only his tools can see. He believes the ghost would leave the photo, have sex with Van Der Zee, and then return to the photo. He then grabs the computer and sees an injection symbol on the screen. He decides to put the computer in a Faraday bag. He realizes he wouldn't have checked the computer had it not been for his conversation with Maria.

Elsewhere, Brigid Roth and Simeon Winters sit on the plains near an isolated building. Viv walks outside and tells Sim that Viv is on the phone. Viv offers they head to New York and he'll compensate them. He tells them he needs help with an assassination cult, Rubedo, and the supernatural artificial intelligence, the Injection.

Detective and sandwich enthusiast Vivek Headland investigates the strange case of the man having an affair with the ghost of his dead girlfriend.

Retrieved from "https://imagecomics.fandom.com/wiki/Injection_Vol_1_7?oldid=55473"
Community content is available under CC-BY-SA unless otherwise noted.