Invincible: Death of Everyone 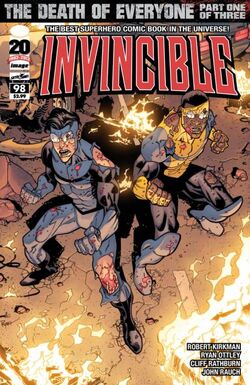 The Death of Everyone is an three-issue event that takes place in the Invincible universe.

The Road to Death of Everyone

Mark and Zandale meet up and Mark tells him to keep his old Invincible costume. Mark dons the blue and black costume he got before. He flies off to see Dinosaurus and asks him what’s been going on. Dinosaurus tells him that the climate is changing and millions must die so that billions can survive. An angry Mark grabs Dinosaurus and he directs him to Los Angeles.

Mark rushes to Los Angeles and Dinosaurus apologizes, stating he is sorry that it has come to this. Meanwhile, Angstrom Levy demands to be released from his captivity get revenge on Mark. The duo send a shock through his head. Angstrom argues that has worked tirelessly to help their world, adding to its population. The Technicians decide to release him since they have no use for him.

Mark calls Cecil to get the Guardians of the Globe to help with disarming the bomb there. An angry Cecil says that this incident will be on Mark. Mark finds one and Cecil sends the Guardians there. Ms. Popper teleports Rex’s drone to the location. Rex reveals to Mark that Dinosaurus’s new Vegas was a large Hydrogen bomb and Mark finds another one. Brit, Yeti, and Shapesmith arrive. Brit suggest that they send a scientist to deactivate the bombs, but Rex uncovers that it is a device can causes earthquakes.

A building collapses on Yeti, Brit, and Shapesmith. The trio attempt to save as many civilians as they can. Rex tells the team to destroy the devices to stop the signals. Mark and Outrun destroy them. Mark sees Dinosaurus arrive through a teleporter and charges towards him. Dinosaurus asks why Mark is trying to save the life of a few rather than billions. Mark calls him “insane” and Dinosaurus states he knows he doesn’t believe that. Zandale, Japandroid and Kaboomerang manage to get a few survivors out. Dinosaurus reveals to Mark that Los Angeles was just a distraction. Several bombs go off in Greenland, causing a large tsunami wave. Mark grabs Dinosaurus and sees the wave flood major cities including Los Angeles, New York City, Paris, Dubai, Tokyo, Sydney, and London, much to Mark’s anger.

Mark looks in horror of what has happened and Dinosaurus argues it’s for the better. Meanwhile, Rex tells the Guardians of the Globe and the various other teams to evacuate the cilivans in the other major cities. Rex reports to Cecil about what’s happening. Mark tells Dinosaurus how he’s a mass murderer and he had made Mark an accomplice. Dinosaurus attempts to rationalize with Mark, but he refuses to listen. Dinosaurus argues that he said some good came out of Las Vega’s destruction. Dinosaurus launches him and asks what he’s trying to accomplish, stating that he cannot beat him in a physical fight. He goes on to say that he doesn’t it for glory, but rather because he cares.

Meanwhile, Thragg has all the Viltrumites meet on their warship and give them a speech. Thragg tells them that they are to interbreed with humans and announce their takeover of the planet, stating to remain in hiding. Thragg warns the group that they are not to interfere with the events that are going on Earth or they will face his wrath, much to Kregg’s dismay.

Meanwhile, Bolt talks with Rex’s drone as they help evacuate New York and Jersey into teleporters. Rex reveals that he has all the people removed and out of the streets. Bolt argues it's not enough and that the people are evacuated, but they can't be displaced for long.

Rex says that he will continue to track Mark's battle with Dinosaurus and says that they are still in Los Angeles Mark kicks Dinosaurus off of him and tells him that he was foolish to trust him. He goes on to say that for the sake of humanity, he has to die. Dinosaurus argues that if he’s going to interfere, he must die instead. The building they are under collapses and Dinosaurus holds Mark’s defeated body. Dinosaurus prepares to crush his head and says that he has no choice but kill him.

Dinosaurus smashes his palms on Mark’s head, causing his eyeballs to pop out as well as smashing his face. Dinosaurus rips Mark in half as two news reporters look in horror as they record it live. Various characters from the Invincible Universe would see Mark’s death being broadcasted live.

Mark appears in a room inside his mind and begins to contemplate why he got there. A voice calls out to him, revealing to know his secret identity.

Zandale saves passengers from being flooded and he communicates to Rex who is working on a project to help contain the waters with D.A. Sinclair, Chris, and his drones.

Mark continues talking and learns that he had died, much to his horror. However, the voice reiterates and says that he made it seem like he died. He tells him about the information that he got on Viltrumite Warship, revealing the voice to be Dinosaurus. Dinosaurus reveals to Mark that he has put Mark into a coma that disconnected from his mind from body.

He reveals to Mark that his flight is achieved through a sensitive and complex process in his ears. He states that when a certain frequency is played, it put him in the coma. Mark asks why people think he’s dead. Dinosaurus reveals that he had cloned a body of Mark, but could get it to work. He also reveals that he hacked into the teleportation signal that Cecil had used to teleport into the warship. He then traded places with Mark’s body and killed the clone on television. Dinosaurus argues that he has freed Mark from the blame of the events and he is free to work with him again. At Immortal and Kate’s house, Immortal decides to get out of retirement and go help out with the world flooding. Kate argues that he’s needed with their twins, but Immortal argues that he can help with others because it’s the right thing to do. Kate accepts his explanation and goes to help.

Meanwhile, Angstrom Levy comes out of the Technicians dimension, ready to exact revenge on Mark. He comes up from the flooded water and learns that Mark is dead, much to his shock.

Continuing, Mark is baffled at Dinosaurus thinking that he can work with Mark. Mark argues that he had sacrificed people on a theory rather than a fact. Mark goes on to say that the coming crisis has cause people to adapt and says that he has delayed it by killing all those people. He argues that now that the cities are flooded, resources will be in more high demand. Mark argues that the villain thinks he’s the good guy and says that they will both pay for their actions.

Dinosaurus releases Mark from his coma after realizing that he is right. Dinosaurus compares himself to a god and says that he thought he was doing it to help, but much rather to inflate his ego. Mark asks for his help in fixing what he had done, but Dinosaurus refuses. He states that it will be his final act and believes that if he were to live, he would continue doing radical things. Dinosaurus reveals to Mark that he must kill him. After killing him, Mark walks out and sits on the edge in sorrow. Cecil arrives after tracing the teleportation signal.

Cecil asks Mark if he knows what’s right for the world. Mark answers no. He goes to say that he knows he will go to prison, but asks if he can help get the sea level back to normal. Cecil reveals that what Rex was working on previously is a two new artificial moons that will get the sea levels back to normal. He also reveals that they will be used for new Guardians of the Globe as a base. Mark asks how many are dead and Cecil reveals 800,000, but says it could be about a 1,000,000. Mark asks to speak with Eve before he goes to prison. Cecil instead offers him a chance to work for him. He says that’s his choice or he will go to prison, much to Mark’s confusion. Cecil states he can do so, since he has worked with villains with before.

After wrecking the house in grief of Mark’s death, Eve sees Nolan and Deborah Grayson who had just arrived onto Earth. The duo begin to panic and Debbie starts crying. Eve reveals that he was working with the villain and Nolan asks where he can find him. Mark arrives home and reveals that it was a clone. After whispering into her ear, she learns it’s him and hugs him. Mark is surprised to see Nolan and Debbie. Nolan reveals that they came in after hearing about his infection with The Scourge Virus. Mark tells him that he’s cured and that he killed the person who did it. He asks to speak with Eve alone

The duo go to the balcony. Mark tells Eve about how he’s working with Cecil again and he must atone for what’s he has caused. He goes on to say that he will do things the same way he did with Dinosaurus with Cecil. Eve interrupts and reveals that she is pregnant with his child, much to his surprise.

Retrieved from "https://imagecomics.fandom.com/wiki/Invincible:_Death_of_Everyone?oldid=47472"
Community content is available under CC-BY-SA unless otherwise noted.