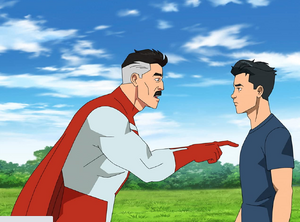 Episode Title
"It's About Time"

Son... kids your age think they're invincible, and it holds them back, makes them careless. The thing is... you're different. You actually are invincible.

Appearing in "It's About Time"

Synopsis for "It's About Time"

The episode opens with two security guards in front of the White House. One of the guards, Steve, talks about an upcoming trip to London with his stepson, Matt. There’s a sudden earthquake, and two identical blue giants holding giant lasers emerge from the ground, who begin shooting at the White House. They are the supervillains known as the Mauler Twins, but they aren’t actual twins. One of them is a clone of the other… if only they could agree which one of them that is. Soon the world’s premiere superhero team, the Guardians of the Globe, arrives to save the day! There’s Darkwing, a brooding vigilante with a dark costume and fancy gadgets. War Woman, a super-strong and skilled fighter with a heart of gold. Aquarus, the king of Atlantis. Red Rush, a scarlet speedster. Green Ghost, a green, flying savior. Martian Man, a shapeshifter. And their leader, the invulnerable Immortal! Although they are winning, the Guardians are stretched a bit thin until get an assist from Earth’s greatest superhero, Omni-Man! He’s faster than a speeding bullet, more powerful than a locomotive, and able to leap tall buildings in a single bound!

A high-school senior named Mark Grayson watches his dad on the news. His dad is Omni-Man, a.k.a. Nolan Grayson. Nolan soon gets home and offers to fly his wife, Debbie, to Berlin for a breakfast date. Mark wants to join them, but he has school. Also, he hasn’t inherited his dad’s superpowers yet. At school, he talks about the Omni-Man fight to his best friend William, who doesn’t know his dad’s secret. Nobody does. Mark then overhears a boy named Todd sexually harassing a girl named Amber. Mark tries to stand up for her but gets beaten up until Amber kicks Todd in the groin. After school, Mark is at work taking out the trash, when he accidentally tosses the trash bag into the atmosphere. “It’s about time,” Mark says, smiling. He tells his parents at dinner that he’s finally getting superpowers, and later that night recalls when he was a kid and his dad first told him his origin. Nolan is an alien Viltrumite from the planet Viltrum, where everyone has superpowers like him. Viltrumites are the defenders of the galaxy, and Nolan volunteered to be Earth’s sole protector. Nolan then told Mark that he would inherit Viltrumite powers one day.

Mark gets onto the roof of his house to try to fly like his dad. Jumping off, he discovers that he can. The next morning, his dad helps him practice flying as well as fighting. Nolan punches him a bit too hard, upsetting Mark. At school, Todd tries to bully Mark, who simply asks Todd to hit him. Todd’s punches have no effect, and an angry Mark wishes for someone tougher to punch. After school, Mark puts on a makeshift costume and stops a bank robbery committed by a villain with rock-hard skin. Nolan arrives and Mark asks him to hit him again. He wants to prove himself to Nolan and be just like him. Nolan takes Mark to his friend Art’s Tailor Shoppe, where he secretly makes superhero costumes. After rejecting an orange and yellow costume, Art says it'd be easier to design a suit for him once he chooses a superhero name. That night, Mark tells his mom he’s worried he won’t be good enough, who says he just has to be the “greatest you”. The next day, when Nolan reminds Mark that he’s invincible now, Mark chooses his new name, and Art makes him a costume. After defeating a new supervillain, Mark announces his name for the first time.

Meanwhile, the members of the Guardians of the Globe all receive a priority alert. Gathering at their headquarters, they wonder which one of them called them here. Suddenly, Omni-Man arrives and quickly murders them one by one. He then collapses onto the floor.

Retrieved from "https://imagecomics.fandom.com/wiki/Invincible_(TV_series)_Season_1_1?oldid=73034"
Community content is available under CC-BY-SA unless otherwise noted.