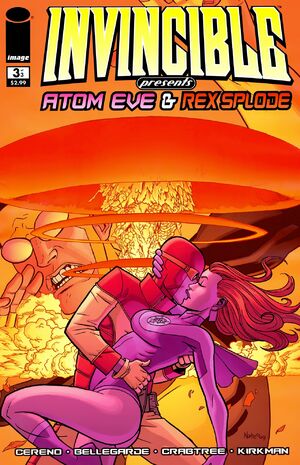 Let me tell you something, G-Man! I've had two dads so far,and they both sucked! So you, your mom, and big brother can all go screw! I don't need you! All I need is my girlfriend!

Rex and Eve rush to the scene of Rex destroying Radcliffe’s facility [1]. The duo see a research team salvage what’s left of the facility. Rex hands the binoculars to Eve and she panics at the site of seeing Steven Erickson. Eve changes Rex’s attire so that he cannot be recognized. He charges the gate chains and kicks them. Erickson notices and has his troops prepare for battle. Doctor Rodgers gives him a large sidearm. Eve manages to restrain a few of their troops and Rex takes out one of them. He asks Eve to open a pathway so he can get to the building. She transmutates the grass below her, opening a pathway to the gas line. Eve surrenders to Erickson while he charges the gas line with potential energy.

Erickson asks for his name and Eve says “Rex Splode” much to his annoyance. Erickson attempts to convince Rex to join him. Rex refuses, stating that all he needs is his girlfriend. He grabs Eve and throws a charged baton into the gas line. The facility explodes while Eve and Rex share a romantic kiss. They shield themselves from the blast. Erickson panics and the duo use an opportunity to escape.

They head to Art’s shop where Rex would be given a new costume. After Rex says a sarcastic remark about his old costume, Eve transmutates her costume and leaves in anger. Rex goes after her and she apologizes as the incident with Erickson had angered her. She reveals to him that she erased his memories [2]. The duo head home.

Around the time of Christmas, Rex would stay at Eve’s house for months. He asks if Eve made him steak. She transmutates his chicken into steak. He asks what she will do. She reveals that her parents will be coming back home and she will likely make an appearance. He asks for steak sauce and he uses the internet to find his family. Eve follows suit and sees what Rex was researching. Rex finds them and charges a BB with the intent to kill them. He then sees that they had started a happy life without him and have two children. He decides to not kill them and drops the BB. Eve arrives, stating that he couldn’t do it. Rex argues that it makes him a coward, but Eve rebuffs. She says that it makes him a good person and the duo decide to fight crime. They bust into a Lizard League base. Rex remarks that this is what had “in mind.” Eve remarks that she knew what he was talking about, implying sex, but says they’ll have time for it later. The duo prepare for battle against the Lizard League.

Retrieved from "https://imagecomics.fandom.com/wiki/Invincible_Presents:_Atom_Eve_%26_Rex_Splode_Vol_1_3?oldid=56195"
Community content is available under CC-BY-SA unless otherwise noted.