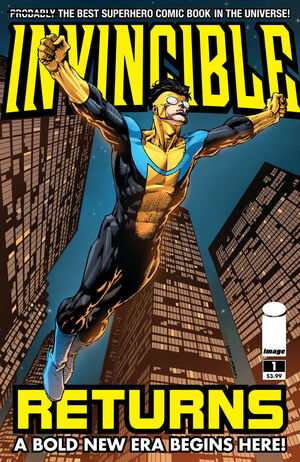 It is time, son. You are needed. The time for war is upon us

AT LONG LAST, INVINCIBLE RETURNS TO HIS ORIGINAL COSTUME!

Mark goes to under headquarters of the Global Defense Agency in The Pentagon with Cecil. Cecil tells Mark how their relationship has changed since he found out that Cecil is reforming murderers.

He brings up how Mark overlooked Oliver killing the Mauler twins, Mark killing Conquest and Rus Livingston. Mark defends himself and Oliver by saying that Oliver views life and death differently. He also tells him that Conquest tried to take over, saying would kill him again if necessary. He also say that the only way to stop the Sequid was to kill Rus. Cecil tells Mark that he is terrified of Mark and how he sticks to his actions when he’s made his mind up.

Mark believes he’s isn’t being logical and Cecil transmits to D.A. Sinclair. Sinclair attempts to hide the Invincible Reanimen while he has his fiancée next to him. Cecil talks about how Mark’s error in judgement could cause people and how his Viltrumite temper gets the best of him. Cecil shows Mark that bad people can reform with Sinclair as an example. He tells Mark that Sinclair’s technology is being used on corpses rather than live subjects. He also tells how they put the work of 20 soldiers. He also tells him of Sinclair’s engagement and that he’s expecting a child with another scientist, Justine.

Mark congratulates them and Cecil continues. Mark admits that he was wrong. Donald interrupts and tells them that there’s a problem in New York. Mark moves and Donald discusses what has happened. He says that he’s not comfortable with manipulating Mark and Cecil believes that it will bring him to their side. They also discuss Conquest and hope to keep him escaping a secret. Conquest arrives to the Viltrumite Warship to pick to his leader. Kregg demands that he bow to their leader who title and name are Grand Regent Thragg.

He bows and trembles in fear of him after telling Thragg he failed to conquer Earth. Thragg compares him to an animal and asks what use does he have for him, implying that he will kill Conquest. Anissa and Kregg stand guard. Conquest tells him that he underestimated Mark and toyed with him, begging for forgiveness. Thragg decides to let him live and gives him the task of killing Mark and anyone who is assisting him. Eve goes to William and Rick’s dorm and reveals to William that she is pregnant.

William congratulates her and Eve goes on about how she’s too young to be a mother. Eve says that she wants to start a family with Mark, but not yet. A curious William asks why she’s talking to him about it and she says that he’s the closest thing to a friend, much to his confusion. Meanwhile at the Grayson Household, Oliver is eating cereal, much to Debbie frustration. Oliver asks how things are with Paul with her being unsure. Mark goes to New York and saves Titan from being attacked by a dragon. Titan hired Magnamaniac, Furnace, Tether Tyrant, and Killcannon to fight for him.

Mark drops off Titan and interrogates him. Titan reveals that after he took over Machine Head’s operation, he became part of The Order. He also tells Mark that he was sent to free Liu’s agent, but wasn’t able to fast enough. He goes on to say that they are trying to fight him out of his territory. Isotope teleports to Titan and reveals that he knows Liu’s location. They teleport and Mark continues fighting the dragon. The dragon disappears and Mark sees the henchman hired by Titan are beaten by Liu’s bodyguard who has torn Magnamaniac in half, beaten Tether Tyrant with ease, and Killcannon. Isotope holds Liu by his neck, making his conscious, making his dragon disappear. He teleports out the vicinity while Mark dashes in.

Mark questions why Titan is fighting old men and Titan reveals that the dragon is Liu’s soul projection, citing why his bodyguard his body. Mark grabs Titan’s neck, suffocating him. Cecil arrives to tell him to stop and he leaves.

Mark flies to Art’s shop to talk about what’s been happening to him. Mark tells how he killed Rus Livingston and attempted to kill Titan. Mark also tells how his Blue and Black costume is a curse. Mark decides to get a new costume from Art. Mark flies to his house to see Eve on the balcony to show off his new costume. He tells her what happened and he says that he’s done with killing people, saying that it’s too easy. Mark suggest that they get dinner and Eve wants to talk to her about her pregnancy. However, Nolan and Allen arrive. Nolan asks Mark for help in the coming war between the Coalition of Planets and Viltrum Empire.

Later, Mark and Eve go to dinner at Crockett’s Fine Grill and Eatery. Mark says that he wants to spend his time with Eve before he leaves. Eve states that she wish should go with him, but says that her powers are acting up. Mark asks what wrong, and she is unable to reveal to Mark about her pregnancy. She asks him if he’s okay with him seeing Nolan and Mark responds with it being weird. They decide to leave after and Mark discusses his encounters with other Viltrumites since Eve has no idea who they are. He talks about him meeting General Kregg on Thraxa and how he gave Mark the duty to take over Earth. He also tells her about Anissa, a woman who came to check on his progress and offered her help to convince Mark that Viltrumites can help. He also told her how she fought him after he refused to help the Viltrumites. They both become saddened when they talk about Conquest. Mark tells Eve that he believes that Nolan really loves him and that he is scared of what the war will make of him.

Retrieved from "https://imagecomics.fandom.com/wiki/Invincible_Returns_Vol_1_1?oldid=67420"
Community content is available under CC-BY-SA unless otherwise noted.