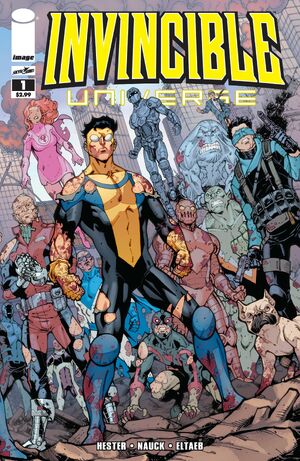 Following the events of the Death of Everyone,[1] Cecil manages to convince Mark to work for him again. An assistant by the name of Marisol Velasquez goes through the teleportation door, much to Cecil’s frustration. A confused Cecil asks what happened to his previous agent and she reveals that the flooding killed him. They go back to while Marisol lets him know what’s going on around the world. She reveals that 900,000 are dead and 300,000 homeless.

He asks her to press a button on her tablet and he sees Gary Hampton and the Wolf C.O.R.P.S. rescuing Inuit natives in Alaska. He watches the Actioneers stop a New Jersey prison break and the Guardians of the Globe building a sea wall in Bangladesh. She reports to him that the artificial moons restroom need A.D.A. approval. She also reveals that Kid Thor had been resurrected.[2] He notices a drawing on her desk from her daughter and he becomes angry, stating that attachments can make her refuse come to life hard decisions.

Meanwhile, Kid Thor talks about his recent resurrection with Knockout, Brit, Robot, and Bolt. Cecil arrives and Kid Thor reveals that he’s was fighting Set’s brother. Cecil speaks with Bolt asking for his help. He offers it, but says that he’ll comply later. Cecil asks for Marisol’s input and Cecil says that he may need her when he begins to make decisions. Knockout recalls what had happened and how she put his hammer back with him, causing his Resurrection.

Kid Thor reveals to Robot that the hammer has been passed down for generations and he asks Kid Thor to hand it to him. He dies again, revealing an Item Dependency as Kid Thor must have the hammer on him at all times. He places it back and he is revived again. Robot tells Kid Thor that he will work on pair of gloves to keep the hammer on him at all time. Cecil asks the Guardians to help in the restoration effort, but Zandale Randolph stops him. Brit talks about how the effort has kept him busy and how he has seen his family in a week. Outrun and remarks that some have lives and children too. Cecil becomes angry and his artificial skin starts cracking. Cecil argues that he has 7 billion people to protect and his noses falls off, much to Outrun’s disgust. Brit takes him to his chemical bath so that his artificial skin can be restored.[3] Cecil observes from his bath that various heroes battling The Order members previously.[4] Mister Liu appears before him with his bodyguard. He reveals that the teleportation countermeasures exhausted Isotope. He goes on to say that Cecil is the only one he can trust, ironically remarking that he is his enemy.

They go to Stronghold Penitentiary with Robot, confused at Cecil for making this decision. Liu reveals his origin story to the duo. He reveals to them that the dragon had killed his wife, and destroyed his homeland. With nothing to lose, sorcerers from all across various kingdoms tattooed an incantation on Liu to trap the dragon. With nothing to lose, his hatred for it would contain the dragon. As he got older, however, he would lose his grip on the dragon and as he got closer to dying, the incantation begin failing. In order to keep him from being free, he would have Cybernetic Enhancements to keep him alive longer. Robot argues that he should die and says that they can contain the dragon. Liu argues that his grip on him is what hold him back. While he is operating him, he falls unconscious and the dragon is released.

Retrieved from "https://imagecomics.fandom.com/wiki/Invincible_Universe_Vol_1_1?oldid=56196"
Community content is available under CC-BY-SA unless otherwise noted.