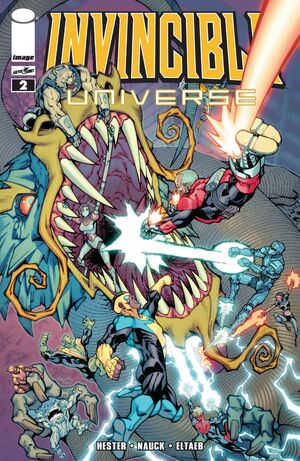 After Mister Liu’s ghost dragon was released, the guards of Stronghold Penitentiary shoot him, but they have no effect on him. Cecil asks what happened and Robot reveals that he lost conscious. He also plans to give a synthetic portioned brain, but asks for time. A steel girder falls on Cecil and Marisol Velasquez begins to worry. She goes through the teleporter that appears.

Knockout and Kid Thor enjoy their time together with Kid Thor having his specialized gloves. Knockout goes on to say that she doesn’t want her and Kid Thor to be separated. She gets on one knee and attempts to propose to him. Ms. Popper interrupts and asks for their help. The debris begins to fall and Mister Liu’s bodyguard help with the collapsing debris. Marisol brings Mark Grayson, The Immortal, Tech Jacket (Zack Thompson),Wolf-Man, Capes, Inc, Actioneers, and the Guardians of the Globe to fight the dragon. Brit tells them to attack the dragon and Immortal does so.

Zack fires a beam, though the latter has no effect on the dragon. Kursk, Killcannon, and Doc Seismic use the opportunity to escape. Francisco Vasquez and Code Blue stop them easily. Wolf-Man rushes to the collapsing building. Robot asks for his help and he pries open the drone’s head, revealing the artificial brain. Mark is swallowed whole by him and he attempts to escape by punching it.

He notices that it is stronger than before. He prepares to charge for the rest of the heroes, but the dragon disappears after Liu was given the artificial brain parts, releasing Mark. A baffled Kinetic realizes that they saved the villain’s life. Immortal remarks that he is already in prison. Liu corrects him and has Isotope teleport him and his body guard elsewhere.

Cecil defends his action, stating that he stopped a bigger evil for a smaller evil. Zack finds Marisol’s body, revealing that she was crushed by the debris he shot. The team becomes depressed and Cecil hangs to drawing of Marisol’s daughter on the wall of other agents that had lost their lives. A new assistant is given to him named Ben Koslowski. A narrating Liu remarks that Cecil is maintaining what humanity he has left by saving the lives of people.

Retrieved from "https://imagecomics.fandom.com/wiki/Invincible_Universe_Vol_1_2?oldid=68572"
Community content is available under CC-BY-SA unless otherwise noted.