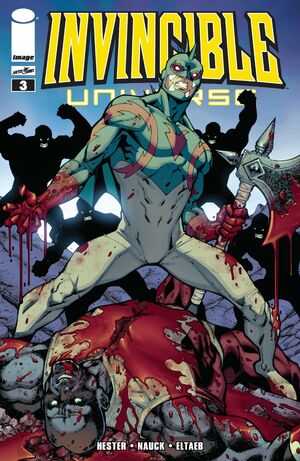 Francisco Vasquez speaks with his 12 step program director to deal with his alcoholism. The director states that he must tell Milos family of his death recalls the events of Milos Stojakovic’s death. As he recalls the death of Milos, he would see War Woman II kill him. He would as well as Walking Dread and Slaying Mantis, though they weren’t the ones who killed him. Before Cast Iron died, he tells him of a location, Sikole, a town in Serbia. He asks the woman transporting him to take to his Milos’ family. She becomes nervous and tells him that she cannot transport him there. She goes on to say that the Stojakovics have problems with the nearby mining company. He gets out and takes care of the two guards guarding the farm.

He enters the house and speaks Serbian. A man appears before him and asks him to stop speaking Serbian. He asks that they meet in the middle of English and pours him a drink. The man argues that the farm will be going nowhere, citing that the farm has been there for generations. Francisco introduces himself with him knowing who Francisco is. Francisco declines his offer for a drink and the man tells about how the drink is made there. Francisco apologizes for Milos’s death. The man reveals himself to be Milos’s uncle and that Milos’s father died long ago, stating that he raised him as his own. He goes on to say that he was an embarrassment, much to Francisco’s shock. He argues that he fought for the Guardians of the Globe, calling them “pigs.”

The guards recover from Francisco’s ambush. He goes on to say that they bent the river canal to bargain with the mining company. He tells Francisco that they get a cut from the miners in ore. Francisco compares them to a cartel and Milos’s uncle says that the police don’t come to Sikole. Milos’s uncle calls Milos a “disgrace” and spits on the floor. The two guard pull their guns on Francisco. He kicks the gun out one’s hand and punches the other.

However, he catches it and the duo turn into Iron, revealing that Milos’s Iron Transformation isn’t restricted to just him. He throws Francisco and the trio start looking for him. He hides on top of the inside, showcasing his Stealth skills. He gets a Guardians alert, but turns it off. He enters a room and sees an old woman. She screams and he goes to calm, only for her to turn into Iron as well. He falls out the house and the trio see him. The two guards throw him into the pig pit so that they can feed on him. He guts the pigs, killing them all, much to the duo surprise.

Five of them corner Francisco and he reveals that he had placed all the C4 they had on the wall. He activates it, flooding the farm. In order to float upward, the Stojakovics had to revert back to human form, making them easier to capture. The next morning, Black Samson and Outrun arrive with as well as Donald Ferguson. Francisco throws the vodka bottle at Milos’s uncle and remarks that the police may not come to Sikole, but the Guardians do.

Retrieved from "https://imagecomics.fandom.com/wiki/Invincible_Universe_Vol_1_3?oldid=56198"
Community content is available under CC-BY-SA unless otherwise noted.