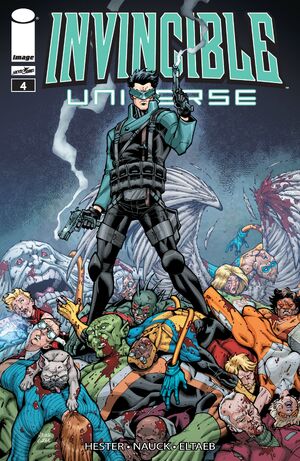 Best Tiger speaks with an unknown voice in his subconscious. The voice asks him how he killed the Guardians of the Globe after studying their routines and powers for a long period of time. First, Best Tiger kills Ms. Popper since her teleportation powers would make her impossible to capture. After studying her habits of going through lucrative nightclubs, he says that pinpointing her was easily. He goes on to say that he brought a gun from a gun shop since they would check him for US citizenship and it would be untraceable

Next, he would go to an Indonesian volcano and pushes Knockout into it. While Kid Thor was trying to rescue her, he drops his hammer, which he needs to live.[1] He loses his life and his hammer as well as his body is melted by the lava. He asks Amanda to throw the passengers before he kills her, much to her shock. However she doesn’t and he cuts the rope anyway. He heads to Utah next and throws a grenade into Le Brusier’s mouth. Rex sees it happen and he shots Rex before he can summon his drones. Kaboomerang, Outrun, and Yeti witnesses it.

An enraged and sad Kaboomerang throws a boomerang at Best Tiger, but he catches it. He throws it at Outrun before it explodes on him, successfully killing her. Yeti charges for him and he drives into his mouth. He cuts his way out, killing Yeti as well. A sad Kaboomerang wallows in grief of his lover, Outrun. He asks that Best Tiger get it over with and he shots him in the head. Zandale Randolph charges in and Best Tiger fires two shots after studying his aerial maneuvers for months. He dogdes one, but the other bullet shoots him in the eye and combining with the Flight speed made the shot lethal. Assuming that the Guardians would be grieving and demanding to know why he killed them, Best Tiger headed to D.C. next.

He crashes a plane into Black Samson, killing him. Pegasus would charge for Best Tiger, but the propeller blade would cut one of her wings, leading to her die from falling. He goes to Pentagon to an angry Cecil and Donald. The duo release the Invincible Reanimen on him, but he uses his Marksmanship and fires into a vent. The bullet ricochets to disable the Reanimen’s control. The Reanimen turn on the duo and kill them. Knowing that Brit would know him to find an escape route, Best Tiger heads to a dimensional doorway. He hacks the door way code, much to Brit’s surprise. He launches into Brit and tosses him in, but Shapesmith saves him. The force of the throw puts Shapesmith in as well and he closes the dimensional portal. He sets it to auto-destruct, knowing that no one could kill Brit.

El Chupacabra would ambush him, much to his surprise. The duo would match each other in combat until Best Tiger removes his headband. He snaps his neck and calls escaping the Pentagon “child’s play.” The voices talks about how his Genius Level Intellect is great. Best Tiger goes on to say that he senses patterns and how he says that what the voice saw of him killing the Guardians was an illusion, showing his resistance to Telepathy.

He states that he was giving him the illusion to locate him. He finds the person who was talking to him, revealing to be none other than Insomniac. Insomniac argues that he can’t kill him for reading his mind. Best Tiger reveals that after Insomniac read his mind, he found out where his telepathic powers come from. He fires a bullet and it ricochets under his chin, successfully cutting him off for his powers for good. He returns to the Pentagon with the group happy to see him. Black Samson says that his Guardian duties take priority over other and Best Tiger smiles as Samson say that he must “pull his weight around there.”

Retrieved from "https://imagecomics.fandom.com/wiki/Invincible_Universe_Vol_1_4?oldid=56199"
Community content is available under CC-BY-SA unless otherwise noted.