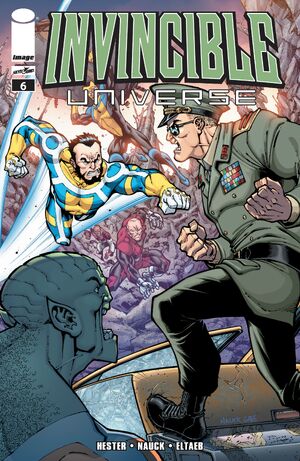 Supreme Leader Cho declares himself ruler of the world after killing some of U.N. leaders, much to Cecil’s frustration. He asks that they bow down to him. Amanda, Black Samson, and Francisco Vasquez charge toward him. He strikes Amanda and Francisco is hit by Amanda being launched. He sends Samson launches and Pegasus follows him. Knockout asks if Francisco is okay and he confirms. Brit, Kid Thor, Zandale Randolph, Robot rush to the scene. Robot scans Amanda’s body and is amazed by Amanda have almost all her bones broken. Francisco remarks that he was too fast for him to see. He asks her to revert to human form so that her body heals instantly.

Meanwhile in Utah, Daniel and Outrun help a cow that is stuck in mud. Outrun moves all the mud out the way while and he falls down. Daniel removes his shirt, much to her happiness. She seductively asks for sex. He reveals her real name, “Lily”, and says that he’s been taking things slow since Embrace had taken over her body. She goes on to say that she wants to look forward, not backward. They prepare to kiss and Donald rushes to get them back to New York.

In D.C., Rex looks over the footage and notice that Cho is shifting dimensional frequencies to simulate Teleportation, though not the same thing. He compares his speed to a Viltrumite’s and his dimensional shifting creates a static field that repels people away. While Zandale is moved by Brit out after being beaten by Cho, Cecil has Immortal launch a strike in orbit. He lands the strike, removing his glasses and revealing his pink glowing eyes. He pushes Immortal at such at such a fast speed, he couldn’t land his punch. He pushes him into a glacier and heads back to New York.

Back in Pyongyang, Ms. Popper teleports there and Best Tiger reveals the other superhumans were killed by Cho. Shapesmith and Agent Hunter go allow with the duo. They are held up by North Korean soliders. Shapesmith shapeshifts into Godzilla and scares them away. They head back and find the machine used to kill them in parts. A man by the name of Dr. Pak offers to rebuild the machine. He reveals that Cho had kidnapped him and that the machine works by intensifying the gravity.

Cho attempts to hurt Brit, but sees that his Invulnerability makes it impossible. He threatens to kill his allies to make him lose hope, but Cecil gives him a false sense of surrender. He leads him into the teleportation hole into the white room. After signing a false contract, He gives Cho the illusion of seeing several beautiful women, revealing the visual capabilities of it. Cho notices that he is starting to get heavy and Cecil ends the program. The device begins to start crushing him. However, the machine gives too much gravity and kills him, much to the team’s surprise. Back in the satellite base, Cecil goes on to say that this cannot happen again. He goes on to say that sometimes if you want to stop this from happening, you must strike first.

Retrieved from "https://imagecomics.fandom.com/wiki/Invincible_Universe_Vol_1_6?oldid=56201"
Community content is available under CC-BY-SA unless otherwise noted.