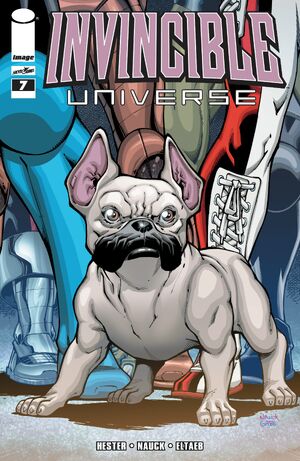 Rex reports to the Guardians that Magnattack is running a cartel under Machine Head. Le Brusier looks around, bored. Zandale comforts the dog, calling him “bro.” Le Brusier looks at him crazy. He corrects himself, stating that he didn’t know that Le Brusier is actually a girl. She sees what’s going on outside with other dog and Zandale offers to cover for her. The dogs have left and Zandale throws a Frisbee at a long range.

She chases after it and breaks through a water silo. Thinking about the beagle he saw outside, she grows in heat. That same beagle is captured and thrown into a van. She growls at the site of it and chases after the van. She loses sight of it and ducks when a bus comes through. She follows the scent until she stops at a garbage. A waiter from a restaurant is there and grabs with a broom, tossing her into the van. On the van ride back, she easily defeats her captors and it brought to a dog fighting ring.

When that same beagle and other dogs are forced to become training dummies for ferocious dogs, Le Brusier launches for the person who’s forcing them to fight. She launches towards him and tears his arm off with ease, showcasing her Superhuman Strength.

The assailants escape in that same van. Le Brusier climbs on top and a baffled Magnattack asks how the dog fighting operation was beaten by a dog. Le Brusier pops in and easily disarms the guards. Magnattack uses an explosive shell and Le Brusier catches it and throws it back at him. Afterwards, she leaves and goes back to the Pentagon to see the beagle there, waiting for him with Knockout and Zandale. A happy Le Brusier smells his anus, much like dogs do to get acquainted.

Meanwhile a grinning King Lizard has revived Salamander, asking him to take his place among the Lizard League.

Retrieved from "https://imagecomics.fandom.com/wiki/Invincible_Universe_Vol_1_7?oldid=56202"
Community content is available under CC-BY-SA unless otherwise noted.