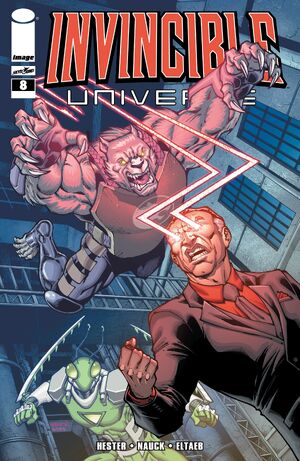 Five months ago in Rio de Janeiro, Red Eye confronts a man named Gustavo who has been stealing drugs and money from his cartel. Red Eye admires his bravery for doing so, but calls him foolish for stealing from the drug kingpin: himself. Despite his pleas, Red Eye uses his Heat Vision to kill him. The prison guard warns him not to do this so much since that there is talk about being extradited to the US. The search the home and sees a terrified boy in the closet. The guard asks if he should kill him and Red Eye asks that he be spared.

Now, Davi would be taken under Red Eye’s care and he would live lavishly in Boitata Prison as the city officials get his drug money. He would have a meeting with Slaying Mantis as Davi gives Slaying Mantis wine. Red Eye talks about how similar Davi is to him, citing them both becoming orphans at early age. Red Eye would speak to Davi in Portuguese, making Slaying Mantis nervous. Slaying Mantis asks for his help since they are wanted for what they did in Paris. Slaying Mantis reveals that he has a family and they are in witness protection, terms for helping Cecil Stedman arrest Red Eye. Ms. Popper teleports Gary Hampton to tackle Red Eye. He stops mid-way after he sees Davi. He fires a beam and it hurts Gary, but Ms. Popper escapes in time. An angry Red Eye misses Slaying Mantis as he escapes. He asks the guard, Alvarez to find him while he observes Wolf-Man. He offers for Davi to keep Wolf-Man as a pet and as a prisoner.

Meanwhile in the Satellite base 1, Cecil reviews the footage of the battle in Paris [1] along with Donald. Ms. Popper emerges to the base, having been hit by Red Eye’s beam. This showcases that the beam follows the target, similar to Darkseid's Omega Beams. It also shows it can follow a person even through Teleportation. Donald checks on her and says that she’s okay since it didn’t hit any vitals. Donald takes her to sick bay while Cecil questions why she came alone.

Back in Brazil, Claire Voyant and Best Tiger watch from the distance with him using a sniper rifle. Best Tiger doesn’t trust that they’re no activity. Claire asks if she doesn’t trust her or her power, much to his annoyance. She flirts with him, calling him “delicious.” She speaks with Cecil on the earpiece. Cecil reveals a change of plans to the duo. He gives them a new mission: Rescue Wolf-Man and capture Red Eye while keeping US presence hidden. Best Tiger rushes into the slums.

Back in the prison, Davi offers Gary water. He thanks him for giving it to him. Davi remarks that he will not hide this time, but much rather help.

Best Tiger begin searching the city and Claire looks in horror of the living conditions. Best Tiger remarks that she should travel more to see the world. They arrive at the prison and Claire uses her Charisma to seduce the guard while speaking to his telepathically. She charms him up to the point she starts giving parts of operation. Slaying Mantis attacks him and plans to leave. Slaying Mantis reveals Wolf-Man’s hesitance when he saw Davi. Gary asks Davi for moonlight as he is growing weak from no exposure.

At the second orbital base, Francisco Vasquez gets mail and opens it up. He sees that he is invited to Kid Thor and Knockout’s wedding. He also sees that his divorce is finalized. He goes on to say that he is happy for the duo and also has been waiting for the divorce to be final.

Claire scream in pain from a Psychic Attack. Best Tiger goes to her and she says that she is feeling static from being in this area. Upon there, a large vault door lays ahead. Claire notices that there isn’t anything human behind the door. Best Tiger asks Slaying Mantis to cut a weak part of the structure to open it. Slaying Mantis does so with his energy blade and Best Tiger punches it, causing the structure to collapse. The trio notice a large being that isn’t from Earth.

Retrieved from "https://imagecomics.fandom.com/wiki/Invincible_Universe_Vol_1_8?oldid=56203"
Community content is available under CC-BY-SA unless otherwise noted.