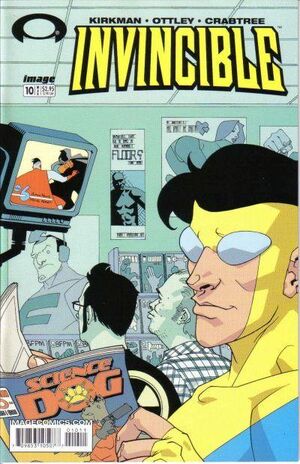 Mark attempts to stop Doc Seismic from destroying Mount Rushmore. Seismic then sinks himself into the Earth. Mark is applauded by the tourists there and he heads home. Nolan attempts to talk to Mark, but Mark refuses and goes to bed. Nolan receives a call from Cecil and leaves. Mark and Eve talk for while then split. William then surprises and asks if he wants to hang with him and Chad at Burger Mart. Mark refuses and says that he has to go to the comic store.

Debbie reads a newspaper while Nolan arrives. Nolan tells her that the new Guardians of the Globe isn’t as effective and that he is picking up their slack. He gets another beep and Debbie tells her she loves him. Nolan returns it and leaves. Damien Darkblood goes to investigate the murder scene of the original Guardians team.

Samson goes to Stronghold Penitentiary to visit his butler, Sanford. Samson says that he will work on getting him released from prison. Mark heads to the comic store and learns that Filip Schaff, the creator of Science Dog, is there. Mark goes back to his house to get his comics and heads back in line. Mark gets his comics signed and Filip talks about how he reuses panels to add dramatic pauses.

Nolan then stops a monster from attacking a carnival. The Immortal rushes in and attack him, asking why he killed the original Guardians. Mark then sees the Immortal and his father fighting on television, flies to see what happening. Debbie also notices that he is fighting Immortal and decides to watch the news too. Mark flies in to see them fighting. Nolan impales Immortal with his fist and bisects his torso from his legs, disemboweling him. Mark looks in shock, with Nolan shocked that he noticed him. Nolan then asks Mark that they talk.

Retrieved from "https://imagecomics.fandom.com/wiki/Invincible_Vol_1_10?oldid=59981"
Community content is available under CC-BY-SA unless otherwise noted.