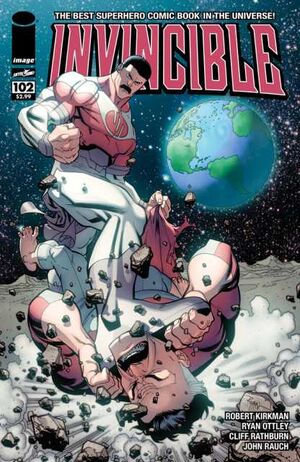 Nolan and Debbie prepare to have an intimate moment. Thragg becomes angry and charges towards Nolan with the intent to kill him. He sees Debbie getting sucked into space and he heads butts Thragg and go save Debbie. He grabs her, but he brought to the ground by Thragg. He sees an airlock closing and pushes into it while he fight Thragg. A confused Nolan asks why Thragg attacked him, stating he posed no threat to him. Thragg becomes angry at the statement and decides to tell him what his significance is before he kills him. Thragg tells how Viltrum was a paradise before Argall’s death by Thaedus.

He would reveals that Argall’s heirs were many and hidden as the Viltrum Empire had many enemies. Before the heirs could be found, the Viltrumites fought in a civil war to call the weak on the planet. Thragg would fight in this war. The population cut in half, Thragg would lead them as Grand Regent with the task of finding the heir. Seen are Anissa, Kregg, Thula, and Lucan bowing to him, meaning that they are thousand of years old as well and most likely born on Viltrum. However, The Scourge Virus had infected the population and Thragg had assumed the heir died from the virus. Thragg would led the people from the dark times and claimed to be a better ruler than Argall himself. He would keep Argall’s skull at his side as a reminder and would stop searching for the heir, feeling he earned his command.

After finding out, he would kill the scientist so no one would know about the relation he learned from Mark. Nolan states he doesn’t care and has no desire to rule. Thragg argues that he can’t have Nolan or Mark stand between his legacy. Thragg pummels Nolan and easily overpowers him. Nolan kicks him off, but Thragg continues to pummel him. Nolan headbutts him and Thragg gets serious. He easily overpowers Nolan and continues his attempt to kill him. He punches him hard enough to make his eyeball pop out his head. He goes on say that he has earned his right to lead and that all Nolan deserves is death.

He attempts to deliver the killing blow, but Kregg grabs his hand, accompanied along with Lucan, Thula, and Anissa. Nolan uses the opportunity to land a blow on Thragg though the blow as minimal effect. Thragg argues that it was an assassination attempt and Anissa asks he has found the son of Argall. Thragg says yes, but argues that he is weak. The four of them turn on Thragg and Anissa argues that Argall’s wisdom that they followed. The four attempt to kill Thragg, but Nolan asks them to let him live. The four stop and bow to him

After having his injuries tended to, Nolan would give an inauguration speech. He argues that they know he is a traitor, but says that the empire should expand inward rather than outward. He goes on to say that Thragg was right on bringing them to Earth to repopulate their ranks. He asks that the Viltrumite embrace their changes and developments in emotions. All the Viltrumites chant “All Hail Emperor Nolan!” and Nolan leaves to heal. It is revealed that Mark had attended the inauguration as well.

Cecil teleports Mark back home and talks with Eve about it. He says that he’s okay with him being the new Emperor of the Viltrum Empire. Mark talks about how things won’t change and how him getting his powers help him meet Eve. He attempts to propose to her, but Eve creates a ring with her transmutation. The duo look in excitement at the ring and the duo decide to marry one another.

Retrieved from "https://imagecomics.fandom.com/wiki/Invincible_Vol_1_102?oldid=62731"
Community content is available under CC-BY-SA unless otherwise noted.