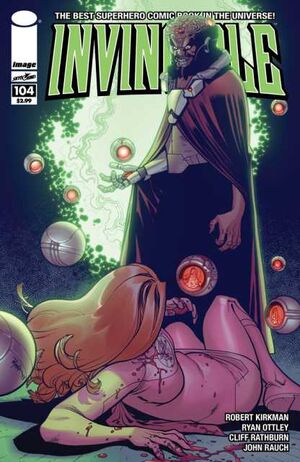 You're dangerous, ruthless...evil in so many dimensions. I believe that says a lot about your nature...it should concern you.

The alternate Mark rambles on and Mark realizes what’s going on. He rambles more about how one of them was hated and thus had been eaten first. He goes up closer and attempts to eat him. Mark punches him away and counterpart takes about how he will like the challenge of getting his meal. Mark attempts to negotiate with his counterpart, stating that he can help, but he refuses. He continues his attempt to eat him, and Mark tries to escape him.

Meanwhile at the Grayson House, Angstrom Levy looks through their refrigerator while a crying Eve attempts to use her powers, but remembers it can hurt her fetus. Angstrom sees it through his orbs and is baffled by Eve not using her powers.Using his extradimensional knowledge, he grins and realizes that she is pregnant with Mark’s child. Angstrom reveals to Mark that Eve’s death would play a key role in Mark turning evil in other dimensions. One dimension he mentions the Lizard League had killed her with her child. Eve tells him that she will refuse let that happen.

The alternate counterpart catches up to Mark and throws to the ground. Mark is saved by another counterpart with a Mohawk and who asks for his assistance. The duo fly, but fail to evade him. He grabs Mark and continues his attempt. Eve tells Angstrom that about what Mark said. She tells him about how Angstrom tried to save Mark after the alternate Maulers were attempting to kill him, causing the machine to kill all his counterparts. Angstrom declares what he said lies. Eve argues that the mass memory transfer could have caused him something got mixed up. Angstrom argue that though it may be true, he still interfered.

Eve talks about how Angstrom was responsible for Rex’s death since he turned himself into a suicide bomb to stop an evil Mark. She tells him about how she didn’t focus on revenge and how Rex’s death made her grow as a person. She argues that Angstrom could be doing good if he had stop trying to kill Mark, much to his shock. Mark knocks back his counterpart and the Mohawk counterpart crashes him to the ground, stating that he turned the other Invincible against one another. He pummels in rage and happy when he kills him. A dimensional portal opens and Mark heads in.

Angstrom attempts to talk, but Mark’s counterpart comes in. He punches Angstrom, but Mark reminds him that if he kill Angstrom, he cannot return to his dimension. Angstrom strikes him back and reveals that he has had a change of heart. He talks about how he had a mission and how he lost his way. He tells Mark about how the memory transfer made him forget what happened. He also tells Mark that he is evil in many dimensions and it should concern him, much to Mark’s dismay.

He surrenders and says that he can one day return to his prior goals. He offers the Mohawk Mark a chance to return to his dimension. He, however, takes Angstrom with him. The portal closes and Eve goes to Mark, kissing him. Mark tells Eve that he has an idea. He has Robot scan the place and he tells him that there’s no signature there. Mark says that he can build a machine since he had done it before. Rex asks why it’s so important and Mark says that he must find him.

Retrieved from "https://imagecomics.fandom.com/wiki/Invincible_Vol_1_104?oldid=68282"
Community content is available under CC-BY-SA unless otherwise noted.