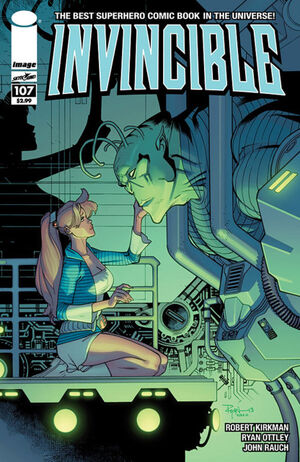 After having much of his flesh incinerated, Doctor Seismic witnesses his new transformation as he becomes something he isn’t anymore. Volcanikka tells Seismic that she has watched him for a long time and has waited to transform him. Seismic asks why she done this and Volcanikka tells him that he will rule by her side as a king, stating that he will be the bridge for her to the surface.

Meanwhile under the Pentagon, Amanda gets Donald to allow her to visit Monax. Donald tells her that he buy her 20 minutes at most. Monax greets her as “father”, much to her confusion. Monax tells her that he has given chance to think about it and says that he acted in anger.

He tells Amanda that she doesn’t know about how evil Rex is, much to Amanda’s confusion. Monax tells her that Rex ordered his death and the Zaxal bloodline, stating that he saw his mother die. Amanda defends Rex, stating he didn’t know. Monax is baffled at Amanda believing Rex. Amanda refuses to believe Monax and leaves in anger.

Rex calls Amanda and tells the various teams to stand by. Amanda arrives to the battle to see Seismic and Volcanikka battling the Guardians of the Globe and Mark. Amanda breaks Volcanikka’s rock path and Rex tells Mark to focus on the giant Magmanite monster, but is tackled by Seismic. Seismic burns lava onto Mark’s skin, though the latter has no effect on him. Mark throws him off and charges for the monster, only for it be killed by someone else.

Pegasus and Brit use their flight to evacuate citizens from the collapsing buildings. Volcanikka uses the opportunity to escape, but Seismic argues that they can still beat them. Volcanikka manages to convince him and the duo leave to the Earth’s bedrock. Mark rushes to see who it is and Anissa reveals it was her that slew it. Mark questions her motives, citing that he saw her spying on Nolan.[1] Anissa corrects him and says he was watching Mark, not Nolan. Anissa grabs his shoulders and kisses him, much to his confusion. He backs off, telling that "hey! not cool." She smiles and states “be seeing you.”, leaving a confused Mark in the sky.

At the Grayson House, Mark goes back while Eve arrives home from grocery shopping. Eve notices something wrong. With enough persistence, he admits that he’s thinking about Angstrom Levy. He mentions that he can come at any moment and Eve asks that Mark forget about it so he doesn’t devote his life to revenge as Angstrom did [2]

Meanwhile, Volcanikka shows Seismic that now that she knows their response time, they can be ready for their next assault. That night, Mark gets a call from Rex. He reveals that he has traced Angstrom’s energy signature and locate him for Mark.

Retrieved from "https://imagecomics.fandom.com/wiki/Invincible_Vol_1_107?oldid=62727"
Community content is available under CC-BY-SA unless otherwise noted.