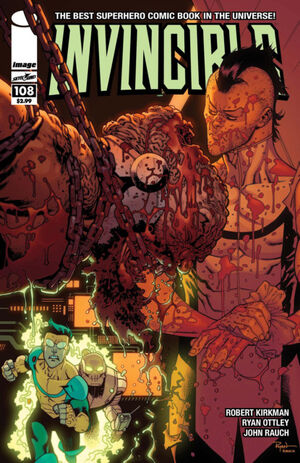 It's funny, though...as against what you were doing with Dinosaurus I was...it was the mostly because it conflicted with my plans. It was really was the most forward-thinking you'd ever been. It impressed me. Made me think you might even be a good ally. But seeing your potential here, no. Only one of us can rule.

Mark and Eve go to the Guardians of the Globe artificial moon, Rex’s command base. Rex reveals to Mark that interdimensional travel is about shifting frequencies and he managed to pinpoint the exact frequency Angstrom Levy, showcasing his Genius Level Intellect. He also reveals that he built a device to go to the dimension. Eve attempts to convince Mark that it’s a bad idea, but Mark refuses to listen. Eve reminds him of her pregnancy and how he can get stuck there.

Mark becomes angry and says that he’s obsessed with keeping Eve safe. Eve slaps him, with it having no effect on him. She leaves in anger and Rex gets suited up. Rex asks he wants to postpone, but Mark insists on it. They arrive through the dimension and Rex notices Viltrumite Warships. They fly out of orbit and think of plan. However, an alternate Conquest asks them to come to the citadel or he will kill them.

The duo play along with it and enter the Pentagon. Conquest shows the two to his leader, believing that they are part of Thragg’s rebels. Their leader is revealed to an alternate Mark [1] in Angstrom’s dimension. He sits on his throne chair with a harem of Atom Eves and tells Conquest to leave.

His counterpart takes the duo to his lab. Mark wishes to know what happened to Angstrom and he reveals that he has been torturing him so that he fulfilled his promise of expanding his empire. His counterpart reveals that Angstrom has refused and he asked that his scientists try to access his dimensional powers. Mark looks in horror, much to his counterpart’s confusion.

His counterpart continues and says that before they resorted to cannibalism, they talked about how each of them turned evil. He tells Mark that he’s wasting his time saving people when they can be worshipping him. Robot transmits a low sonic pulse to take advantage of the Viltrumite’s vulnerable ears and apologizes.

Rex kills the scientists and shoots a bomb into the alternate Mark’s throat. The bomb explodes, causing his eyeballs to pop out and internal organs to pop out his mouth. Rex then decapitates Angstrom, erasing any chance Mark has of returning back to his home dimension. Rex explains to Mark why he betrayed him.

Rex tells Mark that he and Amanda were in the Flaxan dimension longer than they told. Rex tells Mark that he thought about killing Mark, but decided to keep him in the alternate dimension instead. He goes on to say that he was admired his forward thinking with Dinosaurus and thought he could be an ally. However, seeing Mark become Emperor of the Viltrum Empire there, he decided to leave him there. As Rex leaves the dimension, Mark looks in horror of the carnage and yells “Holy fuck.”

Retrieved from "https://imagecomics.fandom.com/wiki/Invincible_Vol_1_108?oldid=62726"
Community content is available under CC-BY-SA unless otherwise noted.