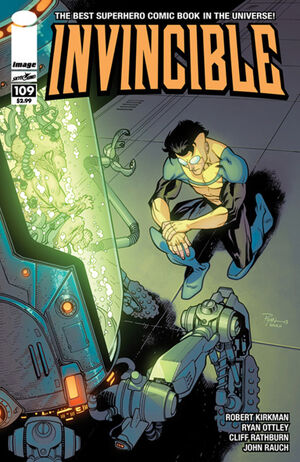 After Rex had betrayed him, Mark begins to panic. He hears Kregg knock on the door and thinks of a plan. Mark tears out his hair into a Mohawk and trades costumes with the deceased Alternate Mark to make his attire and appearance resemble his counterpart. Kregg looks in surprise at the carnage and Mark acts angry to convince Kregg that he is the counterpart Mark. Kregg asks what happened and Mark lies about their deaths.

Mark demands that Kregg to take over his Emperor duties so that he can cover his way out. Mark head out to the Teen Team base and sees a Robot in his disfigured body threatening to kill him. Robot asks him how he knows his name and he says that Eve told him about him. Robot reveals that Mark’s counterpart had killed all of the Teen Team in their dimension. Mark reveals that he is from another dimension and is confused. After talking, Mark leads him into the Pentagon to work on getting him back to his home dimension.

Kregg asks who is he and Mark is stern with him, stating that he’s the one to continue the project. Mark goes into the room and Robot reveals that he has gotten all the work previously. Robot reveals that his dimensional counterpart had cared Eve, but didn’t have the same views as her. He also reveals that when his father asks him to join the Viltrum Empire, he tried to convince his friends to help takeover the planet. They refused and Mark had killed them and Rex, turning Eve against him.

Days later, Robot tells him about the progress he’s making. He also says that he has no reason to help Mark since Mark leaving the dimension could mean his death. Robot reveals that it will take at least five months to finish. Mark comes up with an idea and asks if the Mauler twins are there.

Mark goes to see him and Mauler attempts to fight him. Mauler tells him about how he had killed his clone. They continue fighting and Mark manages to convince to help. Mark reveals to Robot about his plan to clone his body so that Robot could transfer into the body, much his reality Robot did with Rex's clone. He asks that Mark keep a closer eye on Mauler since he doesn’t trust him.

Over the months, Mauler would build the cloning machine and have a sample of Mark's blood taken to serve as the catalyst for Robot’s new body. Mark would also send a transmission the Viltrumites to tell them not to rescue him or attempt to cover up the project. The alternate Mauler notice that Mark isn’t from the same dimension and Mark reveals so. Mauler says that he should trust him since he has seen the error of his world domination mentality.

Weeks later, Mark reveals what his Robot has done to Robot’s counterpart, comparing the two of Mark’s counterpart did. Mark puts him on the cloning machine and the alternate Mauler starts the transferring process. Mark thanks him and the proximity alarm is triggered, revealing that the Viltrumites have come. Mauler panics while revealing to Mark that they brought The Monster. Anissa, Conquest, Kregg, and Lucan arrive with Anissa holding an infant sized Amanda. Conquest asks if she’s sure about it. Anissa says that it will send a message.

An unsure Conquest argues that it took long time to fight her before. Anissa throws the alternate Amanda and she transforms into her Monster form, larger than the size of the bridge on the base itself. Mauler reveals that the process is done and asks that he go. Mark opens the dimensional portal and he reminds Robot to be stern with them in order for believe that he's Mark. The newly cloned Mark tells them that they weren’t supposed to rescue him and says that he has changed. He goes to say that Amanda must be stopped and this a new beginning for the Viltrum Empire.

Retrieved from "https://imagecomics.fandom.com/wiki/Invincible_Vol_1_109?oldid=63701"
Community content is available under CC-BY-SA unless otherwise noted.