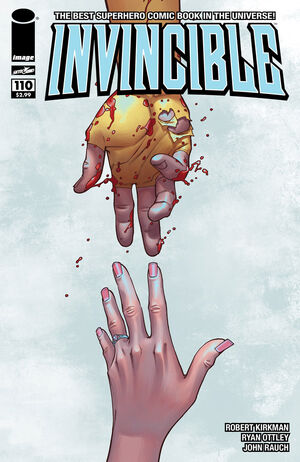 I'm going to make you do so much more than fight me.

Mark arrives through the dimensional portal of the old Teen Team base. He flies to the Grayson House and sees a pregnant Eve knitting, shocked at his appearance. Eve tells Mark that Rex that she was told about Mark's death, revealing that he lied. Mark asks for Rex's location and notices that something is wrong with Eve. Eve reveals that Mark being for six months caused to become depressed and almost lose her fetus from lack of nutrition, much to his sorrow. Eve tells how Rex lied about his death and she refused to believe it at first, but time made believe so. Mark attempts to tell Eve what happened, but she refuses to listen.

Eve goes on to say that the pressure of being a single parent was overwhelming, but it would cause believe that raising the baby with Mark is the best option. Mark notices that she’s not wearing her engagement ring. Eve goes on to say that Mark being gone for long periods of time would bring inconsistency. Mark tells her that she was right about Angstrom and attempts to get her out of house.

Eve tells him that she is happy that he is alive, but says that their relationship is over. A sad Mark questions it. Eve goes on to say that he can still be in the child’s life, but doesn’t think it’s a good idea since he’s unreliable. Mark keeps trying to convince her to leave, but Eve tells him to go. Mark agrees to, but says that she cannot stay as she may be in danger. He promises to make things right and declares his love for her before leaving. He cries as he says “I love you so much,” but interrupted by Anissa asking where he’s been.

Mark tells her “none of you--,“ but Anissa stops him and tells him about the Viltrum Empire mission of procreating with Humans. She tells Mark about how she’s not performing on her part unlike the other Viltrumites. Mark attempts to leave, but Anissa shouts for him to stop. She tells him how she refuses to procreate with Humans, calling them “creatures.” She goes on to say that though Mark is young and weak, she’ll procreate with him because of his Viltrumite DNA. Mark refuses her and leaves, stating that he has somewhere to be. Anissa strikes him as he is attempting to fly away.

Mark tells her that he doesn’t want to fight and is having a bad day. Anissa says she doesn’t either, but she must follow the procreating mission, citing that Nolan isn’t as forceful as Thragg, but the mission remains. She dashes to him in an effort to seduce Mark, emphasizing that he will enjoy it. Mark pushes her off of him, refusing to comply. She loses her patience and headbutts him. Seeing that seduction won’t work, she realizes that she must force it to happen as she says the “Viltrumite way.” Mark tells her to leave, as he is not in the mood to fight.

She responds as says that he will do more than fighting her. Mark lightly fights her off, hoping that she lose interest in the battle. Anissa isn’t swayed and enjoying the conflict. She catches his next punch, noticing that he is much stronger than before. She says that it won’t stop her and she easily overpowers him. She grabs his hair and pushes him to the ground, landing on a farm. She lays on top of him and pushes his arms back, demanding that he stop resisting.

Mark punches, emphasizing that he doesn’t want it. Anissa elbows his neck, saying that she doesn’t care. She reaches for Mark’s gentiles, stating that it doesn’t feel like he’s sure about what going to happen. Unable to push her off, Mark watches helplessly as she tears off both of their costumes and proceeds to rape him. While Anissa is aroused, a sweaty Mark watches in horror. Afterwards, he begins to cry and Anissa demands that he man up. She states that it will take a few more times, implying that she will be back. She flies off, leaving a traumatized Mark to reflect.

Retrieved from "https://imagecomics.fandom.com/wiki/Invincible_Vol_1_110?oldid=39158"
Community content is available under CC-BY-SA unless otherwise noted.