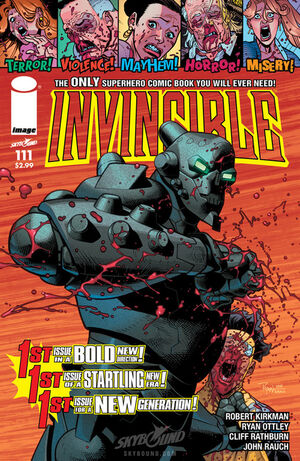 How could I be so foolish... of course he'd find his way back here. I was merciful and it's only going to get more people killed. No way to keep this contained now. I know where he's going. I'd hoped to keep the Viltrumites out of this for as long as possible. Sigh. I'm just not ready... I thought I'd have more time... Oh well. Let the slaughter begin...

After Mark’s tramatizing encounter with Anissa,[1] he is approached by a farmer that offers him some overalls to wear. He flies off to under the Pentagon and tells Cecil what happened. Cecil asks him if he’s in the right dimension and Mark reveals so by telling the events [2] that happened previously already. Cecil believes him, but says that Rex has showed no signs of taking over the planet.

Rex’s drone comes in and reveals that Amanda and him had lived in the Flaxan dimension for nearly a millennium. Rex lies about Mark getting his head stomped. Mark suggest Rex surrender after he revealed to Cecil his plan to take over.

Cecil says that Mark’s accusations are believable since he has been asking for Global Defense Agency emergency protocols. Seeing no other choice, Rex’s drone admits a sonic pulse, taking advantage of Mark’s inner ear weakness. He draws a blade hidden in his drone hand and slits Cecil’s throat, stating that Cecil’s death was on Mark. Mark watches helplessly as the drone stomps Cecil’s head to until it is blood spews all over the area. Mark manages to fight through the pain and destroy the drone. Rex’s drone tells him to meet him at his house

Rex’s drone appears before Samantha Eve Wilkins, much more upgraded than his previous one. Mark rushes in to tell Eve to leave. Rex attempts to convince Mark to work for him, stating that a just ruler can change the world, but Mark refuses. Mark argues that he isn’t just since he had killed Cecil, much to Eve’s horror. Rex argues that Cecil would have opposed him and had the resources to do. Mark charges,asking Eve to escape. Rex’s drone, however, launches a hatch to grip her. He takes advantage of Mark’s inner ear weakness and transmits a sonic pulse.

Rex reveals that his armor has been panel to transmit a high pitch tone that is deadly to Viltrumites. He also reveals that he created the armor from volcanic tempered titanium alloy which is he believes is the strongest metal on Earth, though he says that Mark can likely destroy it.

Mark strikes him and finds out that it causes more pain than not striking him. Eve attempts to remove the latch from her leg, asking why he’s doing this. Rex rips Eve’s leg off while a helpless Mark watches. She screams in pain and Rex says that he may not be able to hurt him, but can hurt him through Eve. She uses her powers to crush the drone’s head while Mark bandages her wound to stop the bleeding. The drone fires a grenade and destroys the house.

However, the duo are able to escape in time. Rex sends his drone back to the orbital satellite base, regretting sparing Mark. He also says that he wanted to keep the Viltrumites out, but decides to bring them into his conflict. While Mark carries Eve, he tells her to form a force field so that she can breathe in space. Eve refuses, but Mark demands she do, stating that it will kill her and the fetus.

On the Viltrumite Warship, Nolan is told by one of the aliens that Mark has arrived. He flies over and looks in horror, seeing Mark ask for help with a bleeding out Eve.

Retrieved from "https://imagecomics.fandom.com/wiki/Invincible_Vol_1_111?oldid=63703"
Community content is available under CC-BY-SA unless otherwise noted.