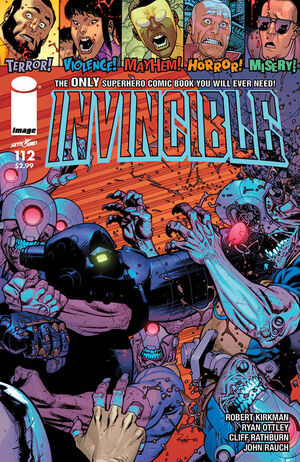 Donald looks in horror to see Cecil dead. Rudolph Conners sends a drone against him. Next, he would send more drones to places areas. First, he visited Black Samson at while he’s giving free haircuts, who mistaken Rex’s visit for a casual greeting. He would kill Samson without hesitation with an energy blast. Elephant would leave in horror and transform to hide. However, Rex would kill him too. He would call Amanda to the orbital satellite base, much to her confusion. Rex mentions the Flaxan dimension and how he can recreate what’s happened there on Earth. While he talks to Amanda he would attempt to kill Kid Thor, Knockout, Yeti, and Pegasus after they finished fighting Vault.

Amanda is confused, asking how it would be possible. Rex says that they should take over. Amanda believes he is joking, but Rex is serious. She talks about how the Flaxan world was flawed and Rex tells her to play no attention to Monax. Rex goes on to say that what he’s about to do is going to put their friendships with others at risk. He asks that she be by his side and she accepts. He also says that they would have to be dealt with. Amanda says that they will come around, but she is unsure of what Rex is doing.

While Amanda and Rex are talking, Yeti had been shot in the face by Rex’s drone while Pegasus was attempting to help him. He would shoot Kid Thor’s arm, separating his body from his hammer. A grieved Knockout rushes to his aid and puts his hammer back, reviving him back to life. Rex would shoot a blast at Knockout’s head, separating her mandible and maxilla. Yeti goes to help them again, but it knocked back. Kid Thor hit’s Rex’s drone with his hammer, and Rex shatters it. It causes a large explosion and erases Kid Thor’s life force, as it was contained in his hammer. Pegasus manages to escape with Yeti from the explosion. Next, Rex would weaken Shapesmith. Shapesmith would cry, believing that Rex was his friend. Rex says that they were and “it’s nothing personal.”

He apologizes before crushing his core, successfully killing him. He also fights Donald who has unleashed the Invincible Reanimen. Knowing that he won’t be able to stop them, he uses a hydrogen bomb inside his drone, similar to what Dinosaurus used on Las Vegas. The Pentagon is destroyed, but Donald detaches his cybernetic head from his body and flies off for his body to be vaporized. Amanda goes to save Rex from Best Tiger, who had realized Rex was killing off the Guardians of the Globe.

This showcases Best Tiger’s stealth skills as he was able to infiltrate the orbital base without Rex knowing about it. Best Tiger is confused as she didn’t expect her to help Rex. Best Tiger escapes and Rex tells him to let him go. Amanda realizes that Rex had already started with his plan. Rex goes on to say that he knew Amanda wouldn’t agree with him. It is there she realizes that Monax was telling the truth about him hunting down Zaxals.

Rex restrains Amanda with his drones despite her best efforts to get out. Rex tells her that she betrayed his first and kisses her. He declares his love for her, but taking her away. Amanda shouts for as the drones take her away. He then has his drones shoot her into space so while she struggles to breath in the vacuum of space.

Retrieved from "https://imagecomics.fandom.com/wiki/Invincible_Vol_1_112?oldid=63704"
Community content is available under CC-BY-SA unless otherwise noted.