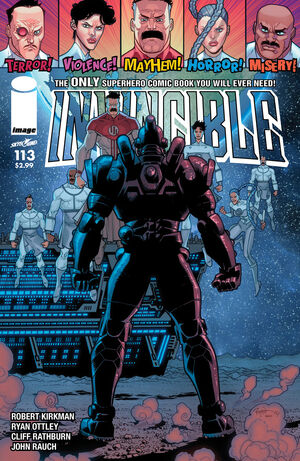 Brit’s house is attacked by Rex’s drone. Brit gets his wife, Jessica, into an evacuation pod. Rex fires an energy blast, but Brit’s invulnerability brings no harm to him. Knowing that he cannot kill Brit, Rex suggest that he surrender. Angry that he threatened his family, he grabs his boot and puts his son inside it.

Since his son, Brit Jr., inherited Brit’s invulnerability, Brit uses the acceleration from jet boot and fires it at Rex’s drone. Junior smiles with excitement as he shreds through Rex’s drone. He picks up his son and takes him with her to a safe house. Rex is frustrated that he didn’t send more drones.

While Amanda is rotting in space, Anissa saves her and takes her to the Viltrumite Warship. On board, Sherry wakes Mark up after Eve to given birth to their daughter. She asks if he would like to hold her. He looks at her and begins to cry. She reveals that Eve is still in surgery, but the Viltrumites are confident that they can save her.

She goes on to say that she won’t have a human leg because she doesn’t have Accelerated Healing like Viltrumites. Mark says that she only wishes for her to live. Sherry leaves and he would talk to his child, stating that her life will “screwed up.” Sherry tells him that Eve’s surgery is over and Mark takes her to Eve. The duo look at the girl in amazement. Mark attempts to apologize and Eve grabs his arm. He pulls away from her, much to her shock. Eve asks if he’s mad at her, but he says he was shocked by her touching him.

He leaves to go with his father, much to Eve’s fear. Mark asks what’s going on and Nolan tells her of Amanda’s condition. He reveals that she took brain damage since there isn’t small amounts of oxygen in space. He also reveal that her monster form’s regenerative abilities can be enhanced by them. Mark asks how long has she been out. Anissa interrupts and says that she was nearly dead. Mark begins to shake in fear at the sight of her. Anissa asks for Nolan’s orders as she analyzed his orbital base. Nolan asks he can be reasoned with and Mark says that he has changed beyond reason.

Nolan is called by another Viltrumite and Anissa uses the chance to whisper “miss you” to Mark, much to his digust. The Viltrumite reveals that Rex’s drone is coming to the Warship. While Anissa is smiling at Mark, Mark suggest that he go. Nolan tells him that they will handle him while Mark is with Eve and his daughter. The Viltrumites go to Rex’s drone.

Rex reveals that he knows they have Amanda and asks how she’s doing. He goes on to say that he knew deep down that he wanted them to save her. He asks and Nolan reveals that “she’s stable.” Rex reveals his goal to the Viltrumites and says his goals sustain peace for centuries. He also reveals how he knows of their plan to replenish their ranks with Viltrumite/Human hybrids, not interfering with Earth events. He is distracted and tells them to give him a minute. Kregg looks at Nolan in confusion.

On Earth, Rex has successfully killed the newly improved Doctor Semsic by splitting him in half. He has also slain Magmanite monsters. He also attempts to kill Kate and Immortal at their home. Immortal loses his right arm. Kate manages to use her duplicates to hold off Rex’s drone while Immortal takes Kate with their two children.

Rex would have D.A. Sinclair assist in building more drones as he meets with P.O.T.U.S. in the White House. After taking care of his objectives, He goes back to what he was saying. He goes on say that he knows about their procreation mission and says that he wants to help. He goes on to say that he knows they can beat him, but not without taking heavy losses. He asks them to work with him.

Meanwhile on the warship, Eve talks with Mark about why she was angry about him leaving to kill Angstrom Levy, calling it a “maybe situation.” She goes on to say that the Rex situation is real and he must fight. Eve transmutates his clothes and tells him to save the world. He says “yes ma’am.”

Retrieved from "https://imagecomics.fandom.com/wiki/Invincible_Vol_1_113?oldid=63705"
Community content is available under CC-BY-SA unless otherwise noted.