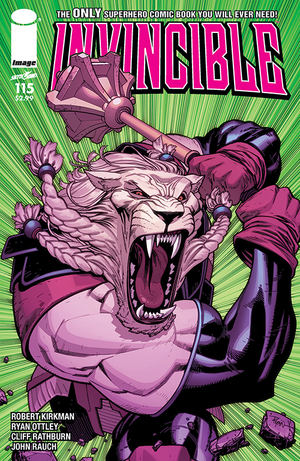 This is not a game! This is what I live for! This is my life!

After nearly wrecking their satellite from rough sex, Battle Beast licks his wounds from the alien woman who scratched him, claiming to be in love. The duo are about to kiss, but Space Racer reports in to tell them that the planet he orbits is where Thragg is located. Space Racer allows him to engage, but says that he can help if he waits. Battle Beast rushes to the planet and falls from orbit with no harm done to him. The planet is revealed to Thraxa, the planet Nolan had assumed control over. Thragg arrives to the scene, baffled that Battle Beast was sent to kill him. It is revealed that Thragg has assumed control as he wears their ruler’s garb. He mocks him as he states that he easily beat him before. The alien woman gets a contact and opens a compartment of the satellite.

Battle Beast claims that contest was never finished. Thragg states that before he kills Battle Beast, he tells him that he is powerful and that he could quench his lust for battle if he joined him. Battle Beast argues that he hopes to fight his equal and better, but says that he has honor and will kill Thragg.

The duo look in the air as the alien woman has released mind controlled Ragnars. One attacks Thragg and Battle Beast becomes angry at her for interfering with their battle. She goes on to say that she made Allen promise him for Battle Beast to live and that she loves him. Battle Beast begins helping Thragg kill the Ragnar.

A Ragnar manages to disembowel Thragg with its claws until Battle Beast saves him. Thragg mocks Battle Beast for assisting. Battle Beast rebuffs him, stating that he has long for this day. A few Thraxans arrive to kill the rest of the Ragnar. The alien woman tells Battle Beast to kill Thragg while he’s distracted. Battle Beast becomes enraged by the Thraxans interrupting and the woman commanding him.

Thragg tells the three Thraxans to leave them and Battle Beast declares that the battle will have meaning. He states that he will accept no advantage and disembowels himself to make the match even. He throws the sword down and Thragg mocks him. Thragg tells him about how he will bred to kill, conquer, rule as the Viltrum Empire’s Grand Regent and how Battle Beast is treating it like a game. Battle Beast argues that this is his life. The duo charge into each other with Thragg having the initial advantage.

During his last attack, Thragg is shocked by Battle Beast’s teeth piercing his tough Viltrumite skin as Dinosaurus was unable to. He throws him off and Battle Beast states that he “senses his victory drawing near.” Thragg argues that Battle Beast fights for glory while he fights for the protection of his newfound planet, whom he has sworn to protect.

Meanwhile in the Grand Palace, it is revealed that Thragg had impregnated thousands of Thraxan women since his sentence to exile. As some wait in line to give birth, another gives birth to boy, another one of the several thousand already there.

Retrieved from "https://imagecomics.fandom.com/wiki/Invincible_Vol_1_115?oldid=63707"
Community content is available under CC-BY-SA unless otherwise noted.