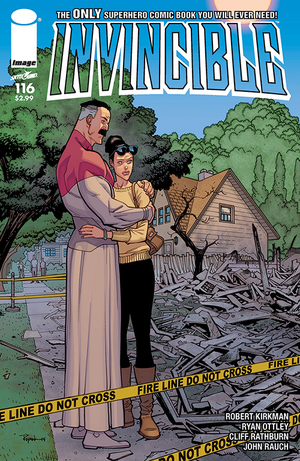 At William and Rick apartment, Willaim tells Mark and Eve tells them about all the good things that are happening. William tells about US troops have been moved out all the areas they were stationed. He also reveals about how state funded colleges are now free and how healthcare is free. He also talks about the crime drop and supervillain incidents. The drug raid has stopped as the assailants were killed and North Korea was liberated, giving them supplies from other countries. The space program is expanded though William doesn’t know that Rex is the reason these changes are happening. Mark becomes frustrated as he sees what’s going on. After Mark and Eve get a call from her parents, they head over to Eve’s house.

Meanwhile, Nolan and Debbie look in horror as their old home has been destroyed. Nolan assures Debbie that making the deal with Rex was the right thing. He goes on to say that his people cannot live in peace and procreate while trying to fight Rex. He goes on to say that Cecil may have wanted things to be like this. Nolan also argues that they are happier than before, with Debbie agreeing. The duo embrace and they fly off after their old neighbor recognizes Nolan’s face.

Mark takes Eve home and asks how her prosthetic leg is. He apologizes for saying it, and she goes on to say that it’s a constant reminder of what happened.

Meanwhile, Thragg uppercuts Battle Beast into the air after Battle Beast had bitten him, making him lose part of his right eye.

Eve and Mark have dinner with Eve’s parents. Her mother, Betsy asked if they have decided on a name for their daughter. Eve comments that she wants to wait until they find the perfect name and says that she doesn’t like her first name. The duo’s daughter begins crying and Eve pulls out her breast to feed her, much to Adam’s digust. He leaves the table in anger.

Mark and Eve would discuss what’s happening and would later attend funerals. The duo attend the funeral of Black Samson, who name is revealed to Markus Grimshaw, a pillar to his old community. Rex, Zandale, and several members of his old community would go.

Next, they would attend Kid Thor and Knockout’s funeral. Several members from Capes, Inc would attend as well as Rex and Bolt would be crying at the loss of his friends. Third, they would attend Cecil’s funeral and be the only two who attend. Mark remark that Rex had the decency “not to show up to this one.” Eve leaves to go back to her house. Mark says that he could have kill Rex while he was there. On his way home, Mark sees Immortal who had lost his arm.

Immortal attempts to convince Mark to fight against Rex, stating that he and Kate can’t fight him alone. Mark agrees with him and says that Rex doing is what’s logical. Immortal argues that the world isn’t logical and that Rex’s changes won’t last long. He goes on to say that the world doesn’t make sense and it should stay that way, using his long life span as witness to the strange world.. Mark agrees and says that he doesn’t want to put Eve in danger again. Immortal argues that he should do what’s right and make sacrifices for the greater good.

Mark goes to the Viltrumite Warship and attempts to convince Nolan to help with battling Rex. He refuses and says that it would put too many Human and Viltrumite lives at risk, much to Mark’s anger. Anissa notices Mark there and casually greets him. He becomes angry and grabs her neck, slamming her against a wall. He tells her to “back off” and Nolan shouts at him what he’s doing. Mark tells him to “stay out of it”. Anissa tells Mark that he doesn’t realize how much she enjoys it and makes her “want to speed up their next encounter.” Mark lets her go out of shock and Nolan asks what’s going on. Mark refuses to talk about what happened and leaves.

Meanwhile, Battle Beast manages to get the advantage on Earth and bits him while attempting to suffocate him. Eve begins discussing children names and can’t decide. She notices Mark staring into space and asks what’s wrong. With enough persistence, Mark tells her that he knows that he must quit super-heroism to be a father. He also knows that he will likely fight Rex, potentially putting the trio in danger. He goes on to say that there’s only a matter of time before he gives in and decides that they must leave Earth.

Retrieved from "https://imagecomics.fandom.com/wiki/Invincible_Vol_1_116?oldid=63708"
Community content is available under CC-BY-SA unless otherwise noted.