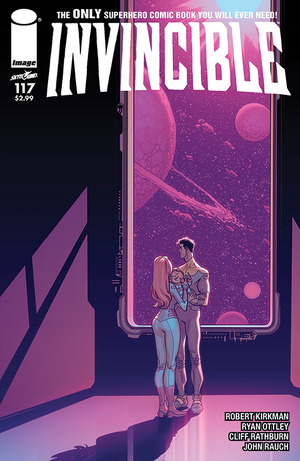 Mark goes to visit a comic book store and sees that his year long absence has granted him many comic books. While discussing their dislikes of the usual corporate comic book, Mark leaves. He flies in the sky and notices Amber Bennett, happy with another man. He smiles as he sees it and flies away. He notices Rampage destroying cars and rescues a woman as well as her son. He puts them on a ceiling, telling the son to enjoy the comics.

He rushes in to fight, but Rex’s drone attack stop him. Rex appears through the teleporter and remarks him being in charge have changed things for the better. He takes him trying to stop Rampage as a sign that he may work with him. Mark refuses and flies off. The son he rescued tells him that comics are “lame” and he tells him to “enjoy the stairs.” D.A. Sinclair goes to Mark from a teleporter. He reveals to Mark that Rex’s has made enemies in the Global Defense Agency and if Mark managed to get people to fight him, he would have inside assistance.

Next, Mark would visit Immortal and Kate at his log cabin. Kate talks to Eve about how Rex attempting to kill them frightened her children. She mistakes Eve’s visit as a sign that she and Mark will help them fight Rex. Outside, Immortal reveals that he knows that the Guardians of the Globe are being held under the Pentagon can free them. Mark tells him about Sinclair’s plan to help him.

Immortal says that he doesn’t he mean “us” and calls Mark a “disgrace” for not helping them. Mark argues that Immortal and Kate took time off of battle in their retirement and says that he won’t risk putting Eve’s life in danger. He tells him that when their experiment fails to call him. Eve goes with Mark and Kate tells calls them cowards.

Next, Mark and Eve would go see a movie with William and Rick. The duo tells him about how much they will miss them. William argues that they shouldn’t go to space, asking “whatever happens in space.”

Meanwhile after Mark and Eve leave Earth, Battle Beast and Thragg continue their battle on Thraxa. Thragg punches Battle Beast, calling him a maniac. He sends Battle Beast launches through the civilization, causing much damage. Thragg asks if this is glory he’s seeking, he happily answers “yes” while striking him.

Mark and Eve get home and she attempts to have sex with Mark. He moves her away, much to her frustration. He notices their daughter crying and she goes to comfort her. Eve asks what’s wrong and Mark says that he is fine, apologizing.

The next day, Mark would go with Nolan and Art Rosenbaum to a restaurant. Art and Nolan reminiscence on the good times. Nolan apologizes for what he did and says that he will make up to him. Art comments that a contract to design uniforms for the Viltrum Empire is a start. Nolan asks Mark if he’s ready to leave while Art pays for the bill.

The duo fly and he comments that he knows that Mark feels like he betrayed him. Mark comments that he should be used to it, much to Nolan’s dismay. Mark apologizes for what he said and says that he understands with Nolan’s decision, though not agreeing with it. Mark hugs his father and asks how long will Allen’s ship to get there. Nolan comments that it shouldn’t take more than a few hours.

Meanwhile at Eve’s house, Adam and Betsy Wilkins with Betsy being saddened by Eve’s departare. Adam says that he knows that Eve is strong and that they love her while Betsy is still crying, wishing to get to know her grandchild.

Allen’s spaceship arrives on the moon and Mark talks with his mother. She goes on to say that she is happier with Nolan than before. She also say that love is learning about the bad things a person is and looking past them. Mark goes to say that he doesn’t hate Eve yet and Debbie remarks to “give it time.” Debbie talks about how Mark has grown up and hugs him, telling him that she will miss him. She tells him that he will visit and tells him to talk to Oliver about sending her a letter.

Mark and Eve enter the ship, awaiting to get to Talescria. The ship attendant covers his eyes and tells them that the journey will be long. Eve asks why and Mark reveals that his parents were the last people on the ship.. Eve realizes what he means and laughs, much to Mark’s annoyance. The duo hug and Eve sees Earth from a distance. Eve decides on the name Terra for their daughter as she says “their own little piece of Earth.” Mark agreeds, commenting that’s “beautiful.”

Retrieved from "https://imagecomics.fandom.com/wiki/Invincible_Vol_1_117?oldid=63709"
Community content is available under CC-BY-SA unless otherwise noted.