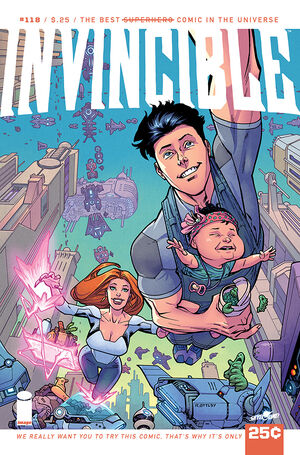 The issue starts with a recap of the Invincible comic for first time readers. It also features art from co-creatorCory Walker and Ryan Ottley. It also includes inked art from Cliff Rathburn from Ottley’s penciling. It tells about how Mark was a normal teenage boy with a normal mom, but who’s father was a superhero with superpowers. Mark would eventually inherit his powers and make friends including Atom Eve, Rex Splode, Allen the Alien, Robot, and Monster Girl. Also, Mark would make enemies as well including Tether Tyrant, Doc Seismic, Mauler, Reanimen, and Sequids. However, Mark would soon find out that his father was the worst after seeing him kill The Immortal. He would attempt to convince Mark to join him in taking over Earth for the Viltrum Empire. Mark would refuse and be nearly killed by him. However, Nolan would leave the planet behind, leaving his son alive. Mark would begin working for Cecil Stedman and take Nolan’s place. He would also fall in love with Eve. Robot would see Rex die after sacrificing himself to save him. Robot would clone Rex’s body and transfer his consciousness into the clone. He would see Rex die after he sacrificed himself to save him. Robot would take Rex’s name to honor him. Nolan realizes that his time on Earth has changed him and he would start a new life, having a son. Mark would fight more villians including Angstrom Levy, Dinosaurus, Conquest, and his evil counterparts. Allen would become new leader of the Coalition of Planets. Rex and Monster Girl would be trapped in the Flaxan dimension for centuries, though the time on Earth was much shorter. Nolan would become Emperor of the Viltrumites, which made former Grand Regent Thragg angry. Rex’s time that dimension would give him ideas on taking over Earth. Mark and Eve would have a daughter. Mark would fight Rex, but Rex would win after Mark saw that he could put other in danger. Mark and Eve leave Earth with their daughter to start a new life on Talescria

Mark, Eve, and Terra arrive to Talescria, with Eve in amazement. Allen greets the duo after their long journey with cheerfulness. The duo thank him for helping them come there. Allen goes to take a look at Terra, calling her “cute.” Terra punches his eye, exhibiting that she may develop Viltrumite strength as Allen’s is highly invulnerable. Allen’s bodyguards go to attack and Eve puts a defensive bubble around her and Terra.

Allen stops his guards from attacking and apologizes as it surprised him. Allen reveals that he is stronger than his guards and that he doesn’t need them. He also reveals that he has been monitoring an off world operation. Mark comments that he will help, but he hasn’t come to work for Allen. Allen rebuffs, stating that he knows and has someone to meet him.

Oliver arrives to the scene with, baring physical similarity to Mark other than his Fauxhawk haircut. Oliver apologizes for being late, and Eve is happy to see him. A happy Mark hugs Oliver, noticing Oliver’s more adultlike appearance. Oliver offers to cook for them with his girlfriend, much to their excitement. Mark comments that he will love to have them over, but is unsure of their house. Allen offers to take them there and shows there around before leaving to attend to his duties. After unpacking and changing Terra’s diaper, the trio fall asleep. Eve takes Terra to her crib and Eve takes off her clothes.

She whispers into Mark’s ear, saying that they are “all alone.” This frightens Mark and he flies off the couch. Eve becomes frustrated with him, asking if they will ever talk about it. Oliver arrives with his girlfriend, Haluma, an alien with a lobsterlike appearance. Haluma greets them and asks where the kitchen is to cook the food they brought. While Eve and Haluma cook, Mark talks about how Haluma seems nice.

Oliver remarks that Mark now knows his standards on Humans while he was on Earth. Oliver whispers “I mean, did you see those mandibles?”, much to Mark’s disturbance. Haluma finishes cooking and Mark as well as Eve look at the food strangely. Mark takes a bite out of one dish, surprised to see how good it is. Mark keeps eating and Eve asks for a vegetable. Haluma hands her one and the four finish up. Mark sits on the couch with a stomachache and Oliver leaves with Haluma.

The next morning, Mark would be in the bathroom, having problems with the food he ate. Eve knocks on the door and breast feeds Terra. Mark finishes and attempts to flush, though not knowing how the toilet works. Eve goes in and sees Mark’s result. She goes to fix the toilet and presses two buttons, flushing it. The duo look in shock. Mark leaves, sarcastically that he will take a shower the rest of the day. Eve goes to him and grabs him. The duo kiss, but Mark pushes her away, crying. Mark sits down and Eve asks what’s wrong. Mark apologizes and Eve persists to know what’s going on. Mark reveals to Eve that Anissa had raped him, the reason why he hasn’t been affectionate towards Eve.

Eve is shocked and he goes on to say that he refused her in the past .He also reveals that it happened after Eve ended their relationship. Eve looks in horror and apologizes, saying that they “can get through this together.” Mark pushes her off of him, remarking that he has held back and should have fought harder. He shows regret and say that he wouldn’t have held back unless part of him wanted it. Eve begins to cry and leaves. Mark stays sitting down until Eve yells for him. He flies over and Eve tells Mark that Terra isn’t breathing.

Retrieved from "https://imagecomics.fandom.com/wiki/Invincible_Vol_1_118?oldid=63710"
Community content is available under CC-BY-SA unless otherwise noted.