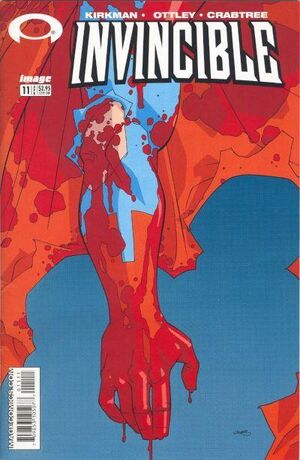 Son, stop. Listen to me. Do you have any idea what our life span is? The older we get the slower we age. We can't live among these frail things... your mother is little more than a pet. Viltrumite DNA is so pure and complete that you are nearly full blooded. I could mate with nearly any alien being of comparable evolutionary development and produce a similar offspring. This means you will eventually become as strong as me. You could potentially be stronger... and you will live for thousands of years. Do you understand what this means? Everything you know and love will be gone before you look thirty years old. You do not belong here. Do you really want to watch your world die around you?

Nolan then reveals to Mark the truth about his origin and the Viltrumites. Nolan reveals that the Viltrumites achieved a perfect society, but not without killing off the weak from their planet. Cutting the population in half, they emerged unbeatable warrior race. Afterwards, a planetary empire was established and was agreed upon unanimously. Nolan expanded on Viltrumite history by explaining the planet conquering process. First, a planet was searched for and founded. They would set up an orbit monitor to see their conquered planet. He revealed that those who accepted takeover would be given Viltrumite technology to help their way of life. Those who resisted would be killed off until they submitted. Seeing it as successful, the Viltrumites double their efforts in conquering planets.

They would begin to use enslaved aliens to conquer planets to avoid overusing Viltrumites. Not long after Nolan was born, he then would accept a job to help find planets, but would be eager to prove himself. Nolan would then audition and finally prove himself worthy of conquering planets. Nolan would conquer several planets and soon lead his own unit. The Viltrumites would destroy an one-eyed alien race civilization. Nolan would be awarded for his planet conquering. As they continue conquering planets, a new strategy was devised to make up for their ranks being stretched too thin. Taking advantage of their long life spans, the World Conquering Committee would send Viltrumites to planets to survey, weaken, and prepare for Viltrumite rule. Nolan would was assigned to Earth and left for it. He would at first hate Earth, and noted that it would always be into some kind of trouble.

He would fight Allen many times, mistaking him for an alien invader. A few months after, he would meet Debbie, his soon-to-be wife after saving her. Nolan would find it hard to settle into human life as he would hurt people such as muggers, doing menial labor, but would find sex for anything other than procreating to be enjoyable. Nolan would eventually marry Debbie. Nolan would encounter many superheroes such as Brit and the original Guardians. He wouldn’t join, but would be welcome anyways. Nolan then befriended them and came to the revelation that he may have to kill them to weaken Earth.

Debbie would become pregnant and give birth to Mark. Nolan then decided that he would raise him as a human rather than a Viltrumite, but not without thinking about it. Nolan then began to realize that he had grown attached to Debbie and decided to put his duties on hold to be a father. After Mark got his powers, he revealed that he killed the original Guardians. Nolan then asks Mark to help him take over Earth, much to Mark's shock. Mark then denies that Nolan’s origin is true.

Nolan then reveals that Viltrumites age slower than humans as they get older, and calls Debbie a “pet.” Nolan also reveals that Viltrumite DNA is so pure that it overrides the other mate DNA and Mark is nearly full-blooded. Nolan also reveals that Mark will become potentially stronger than him and live for thousands of years. Nolan goes on to say that everyone he loves will die before old age can take an effect on him. Mark then refuses to help him take over Earth and the duo began to battle.

Mark and Nolan's battle occured on March 16th, according to Invincible #42.

Retrieved from "https://imagecomics.fandom.com/wiki/Invincible_Vol_1_11?oldid=55611"
Community content is available under CC-BY-SA unless otherwise noted.