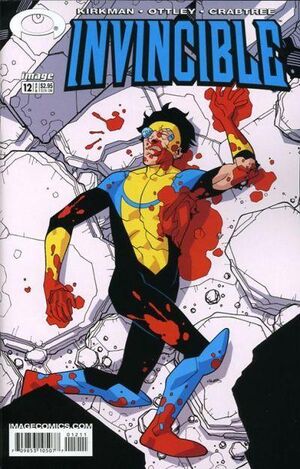 Your mother means nothing to me.

No! I'm telling you the truth for the first time in your life!

Omni-Man punches his son, sending him flying through a series of building and killing many people in the process. Nolan then says that Earth is just a planet to conquered and used. Mark then asks him why he would say that, citing that he loves Debbie. Nolan then reveals that Debbie means nothing to him. Mark refuses to believe it, but Nolan rebuffs him. Nolan spears him into subway and the duo argue, with Mark refusing to believe that Nolan is evil. Mark cites that he was happy being a father and husband and the subway becomes close to collapsing.

Nolan saves Mark and Mark pushes him off. Nolan then becomes annoyed by Mark’s persistence and says that Mark can die with the humans. Nolan also says that he can always produce more children, much to Mark’s anger. Mark attacks him and Nolan easily overpowers him. He would severely injure Mark, sending him flying across various location around Earth. Mark refuses to give up, aggravating Nolan.

Nolan reveals that Viltrumite technology would be shared with Humans. Mark asks what happens if Earth resists with Nolan revealing the human will die. Nolan becomes more aggravated by Mark’s refusal to give up. Nolan then ask Mark what will he have after he’s lived long enough. Mark reveals that he will still have his father. Nolan would ready his punch to kill Mark, but hesitates. Nolan decides to spare Mark and leaves Earth, crying after realizing that he loves Mark too much to kill him.

Retrieved from "https://imagecomics.fandom.com/wiki/Invincible_Vol_1_12?oldid=62904"
Community content is available under CC-BY-SA unless otherwise noted.