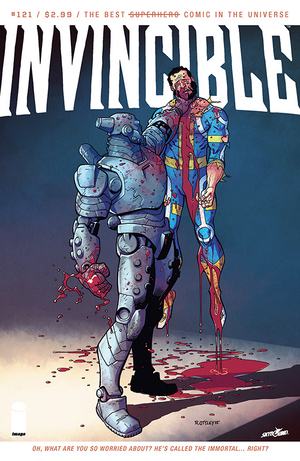 Have any of you looked outside? Have you been watching the news in here? Things have changed. Crime is down, the economy is booming, the crime rate and unemployment have both dropped to record lows. The world is a better place. They're all wondering...what happened? That's the big question...who is responsible for all this? There are TV specials, books being written, everyone is trying to work out what changed...what fixed the world...it was Rex. He saved the world...he made everything better. He somehow did what we'd all wanted to do...make people safe, stop all the fighting. He did it. He murdered so many people...killed friends of ours...but... I just can't argue with his results.

Rex's drones manage to find Kate Cha and The Immortal. Rex has killed many of Kate's duplicates. Kate attempts to get their children to safety while her duplicate hold them off. A baffled Rex asks why Immortal didn't surrender. He goes on to say that he doesn't care what happens as long as his family is safe. Kate manages to escape from the drones. Immortal is taken into prison under the Pentagon while Zandale Randolph apologizes to him. Zandale argues that Rex has brought peace to the world and Immortal mocks him.

Zandale calls Immortal a "prick." Immortal sees D.A. Sinclair to cue for something. The duo continue to walk the halls as Brit, Amanda, Francisco, Daniel, Pegasus, and Le Brusier notice. Immortal tells them to get to the back of their cells and an explosion happens, revealing that Immortal placed a bomb in his body and he had planned his capture. Zandale looks in horror has half of his face was incinerated by the blast. Brit uses the chance for the team to escape prison. Amanda converts to Monster form and Yeti and Pegasus follows suit. She asks that someone grab Immortal legs as he needs to be whole in order to be alive. Monax happens to escape his cell as well and he offers his aid to the Guardians. Brit is blasted by a drone and Yeti offers to help him up. He tells them to go and Outrun, followed by Daniel attempt to escape. Monax and Amanda are overwhelmed by drones, but Monax keeps fighting, destroying some. Rex argues that he's only trying to stop them from stopping him.

Sinclair intervenes by summoning the Reanimen to aid their escape. He asks that they move quickly since the Reanimen aren't a match for Rex's drones. However, he argues that he has more of them and will hold them off. Amanda grabs Brit and swings him around so that they can clear a path. They continue to be overwhelmed, but Sinclair says that he has an idea. He activates the Pentagon to have a white room look to it so that they can't be detected. An angry Rex asks what he's doing and Sinclair says what's "right," something he says he has struggled with. The drones switch to Thermal Vision, but the Guardians and Monax have already escaped. Yeti carries Immortal's body as they leave. Rex argues that he will be punished severely for what he's done. Sinclair, however, escapes using a rocket as transport.

Rex uses the time to repair the damages done on the Global Defense Agency headquarters. Zandale repeats how his face is burned, but Rex assures him that he can fix it. Zandale argues that he's deserves it and how it reflects what he is on the inside. Rex argues that they are doing good, but Zandale rebuffs, stating that wasn't what he's talking about. A depressed Zandale leaves, much to Rex's sorrow.

Brit walks outside in disguise and goes into a secret base disguised as a warehouse. Sinclair begins sewing Immortal back together, baffled at how he is able to be resurrected by being placed back together. Sinclair asks how everyone is doing and he says that they are happy. Monax comforts Amanda, stating that he feels bad about being right about Rex. Amanda says that she feels different after loving Rex and how she hates him now. Monax argues that is how his life was and how hatred has caused him to do bad things. He argues that it makes her a good person.

The group eat food while Monax stands guard. It is revealed that Best Tiger wasn't captured and that he was able to avoid being caught by Rex. Outrun notices a depressed Brit and asks what's wrong. Brit reveals the economy is better, crime has dropped, and unemployment has dropped. He goes on to say that Rex was right, much to Amanda and Kate's anger. He argues that Rex was able to accomplish what Cecil Stedman didn't. He argues that Cecil may have wanted this in the long run, though saying that Rex may have killed their friends to accomplish his goal.

Rex arrives through the teleporter and asks to talk with Brit. He tells Best Tiger to kill him if he does anything else. Rex argues that though he killed people, he had to risk the relationships he had with his friends to accomplish world peace. He apologizes for what happened, much to Amanda's anger. He asks them to work with him again and Brit agrees, despite Amanda's anger. Brit, Yeti, Daniel, Francisco, and Pegasus go into the teleportation door with a depressed look. Amanda says "Jesus" and Daniel argues that the world is at peace and that they'd be fighting for revenge, nothing else. Rex says that it's okay that they oppose him, but says he will hunt them down if only they attack him first. He argues that they will come to his side of things in the end. Amanda, Immortal, Kate, Best Tiger, Sinclair, Outrun, Monax remain behind.

Retrieved from "https://imagecomics.fandom.com/wiki/Invincible_Vol_1_121?oldid=60559"
Community content is available under CC-BY-SA unless otherwise noted.