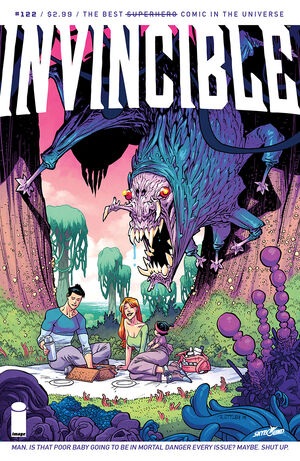 Allen meets with the Coalition of Planets council to discuss locating Thragg. He assures them that it his top priority and that he can be a danger since he has produced many children. One council person recommends they start a breeding program since they already they're is no relative difference between a pure-blood and a hybrid.

She cites that Mark and Oliver can start with it. A councilman of Battle Beast's species strongly disagrees with it. Allen becomes angry and she continues until he yells at her. She leaves in anger and Allen goes back to his office after the meeting is over. The councilman from Battle Beast's race commends Allen for speaking against the program. He says that he is saddened by Battle Beast's death, but says that they is the possibly of another warrior being like him according to a prophecy.

Mark and Oliver meet with Allen about Thragg not being found. Allen ask how Terra and Eve's trip was. Mark recalls him and Eve having to fight the Thorgs since it was their breeding season. Allen apologizes and Oliver becomes angry. Allen offers to take them to see a movie.

Mark and Eve go to the movie with Terra and an alien asks for help by reaching out his hand to touch them. They decline. Moments later another alien accepts his offer and upon touching him the beggar takes on the same identity of the other alien. The trio arrive with Haluma and Oliver awaiting them. Mark and Haluma angrily and briefly speak to one another. Eve is against bringing Terra but Oliver assures that she will be fine.

Meanwhile on Thraxa, Thragg tells his Thraxan mates to prepare for transport. He says that his children can play as they like, but says that they can't stay as the Coalition is looking for them. Thragg thanks the Thraxan woman, but doesn't notice that a Coalition Spy is watching him.

Back on Talescria, Terra is irritated by the sounds and vibrations of the light show. After a while, they decide to call it night and take her home.

Mark and Oliver go on a job for Allen looking for an illegal Kanslok farm, Allen's favorite food. Oliver asks if he wants to get back into action since he hasn't been fighting much. They arrive and a Rynax attacks them. They manage to defeat it, but with losing much of their clothes.

Eve hangs around the house and sees that Terra is asleep. She sees an unnamed animal vomit on the balcony and she remarks how much she hates Talescria.

Mark and Oliver report to Allen and he thanks them for accomplishing the task at hand. He reveals that he knows where Thragg is and that Space Racer is monitoring him. What they don't know is that Thragg has killed several Coalition soldiers and is now planning to kill Space Racer

Mark and Eve try to enjoy a little down time as a chain of events is set into motion that will change the way you look at Mark Grayson forever.

Retrieved from "https://imagecomics.fandom.com/wiki/Invincible_Vol_1_122?oldid=57052"
Community content is available under CC-BY-SA unless otherwise noted.