"Reboot? Part One Of Three" 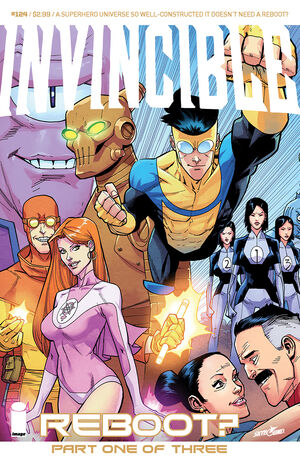 Appearing in "Reboot? Part One Of Three"

Plot Synopsis for "Reboot? Part One Of Three"

Debbie continues to yell for Mark and Mark leaves. He sees his father fighting on the TV screen and he offers to help, but remembers his powers don't come yet. After getting out of class, he goes to talk to Eve and tells her that he is from the future, much to her disbelief. He begins talking about he knows much about her and this intrigues her. He is brought to the Teen Team base where her teammates are in as much disbelief. As he begins to talk about how he knows about Rex's past as a poor child, he begins angry and suspects he's from the government. Kate and Robot arrive and he talks about how Robot isn't a Robot, but a deformed person.

Moments later, He tells them about David Hiles and his plans are put to a stop before any children are killed, much to the surprise of the team. Robot discusses how his lack of relation with people would cause to do something drastic, similar what he has down in the past timeline. Mark worries, but decides not to say anything. Before Mark leaves and gets his superpowers, Robot asks that he saves as many lives as possible, but not alter things too much.

The Grayson family eat dinner and afterwards, Mark flies out in frustration, waiting for this new timeline to over with.

The next day, he goes to see Art Rosenbaum, much to his suprise, stops Titan's burglary, the Mauler twins' project, and D.A. Sinclair's Reanimen project in Upstate University. Mark tells Sinclair not to worry as he will get his redemption. Mark grows depressed and contemplates whether or not he is doing the right thing.

The next morning, the Teen Team and him fight the Flaxans and manage to beat him. However, Nolan would soon find out about Mark's powers there.

After dinner, an upset Nolan talks to Mark about it and Mark asks to talk with him privately. They go above their house and meet to talk about it. Mark becomes depressed and asks Nolan a serious question: does he love him and his mother. Thinking about it strongly, Nolan says that he does and Mark asks him not to try to take over the planet. Nolan frowns and clenches his fist.

“REBOOT?” part one! This one is big, folks. We’re going back to square one. Mark suddenly finds himself without powers. BACK HOME… but aware of everything he’s lived through. What does he change, who can he save… and how will he deal with his father now that he’s knows what’s coming?

Retrieved from "https://imagecomics.fandom.com/wiki/Invincible_Vol_1_124?oldid=55532"
Community content is available under CC-BY-SA unless otherwise noted.