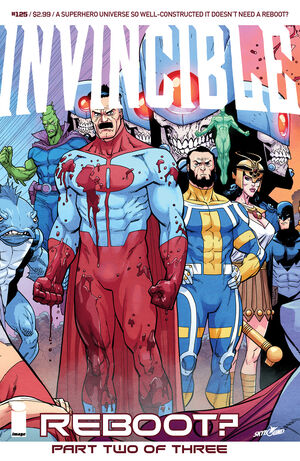 There will be no time for regrets! You will all be crushed under the heel of the Viltrum Empire!

Invincible and his dad are floating in the sky and Nolan is in disbelieve that Mark knows he planned on killing the Guardians of the Globe. Invincible quickly recounts all the events that he tells him will happen, and how he'll ultimately give up as Nolan will realize his love for his family and earth. However, Nolan becomes upset and attacks Invincible.

As they battle, Invincible leads Nolan to Utah. As Nolan punches Invincible, they fly through a wall into the Guardians of the Globe Headquarters. The Guardians are shocked as to what's going on. Mark quickly tells them how Nolan is a traitor, and they all team up to attack Nolan. The Immortal tells Nolan that "he never liked him" and Nolan punches a hole through The Immortal's chest while saying "the feeling is mutual". Green Ghost phases through Nolan and while he's disoriented War Woman knocks him out with her hammer. It is revealed that the Immortal survived this encounter immediately, unlike in the original timeline. Cecil Stedman arrives and agrees to take Nolan into custody.

Later at the Pentagon, Nolan wakes up and finds himself in shackles. He profusely apologizes to Mark and tells him he just 'snapped'. Mark feels regret for having him imprisoned. Nolan thanks Mark for letting him see that he does love his family and Earth.

“REBOOT?”, Part Two Invincible’s father, Omni-Man, murdered The Guardians of the Globe to facilitate his attempt to take over Earth…now that he has the opportunity, can Invincible stop his father and change the course of history…for the better?

Retrieved from "https://imagecomics.fandom.com/wiki/Invincible_Vol_1_125?oldid=67424"
Community content is available under CC-BY-SA unless otherwise noted.