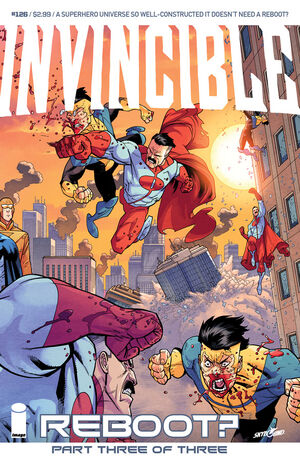 Are you my daddy?

Following Mark's travel back in time, Mark warns Allen the Alien about the Viltrumites' plan to takeover Earth. He also tells him of his father and how he will join him in the fight. Allen goes to the Pentagon with him and Nolan reveals his change of heart to Allen. Nolan is released and says his goodbyes to Debbie before going with Allen. Cecil Stedman thanks Mark and Mark tells him to give him a headset so that he can tell him where to go where other bad things will happen.

Mark goes to fight the Lizard League, The Elephant, Doc Seismic, and the Flaxans along with the Reanimen, old and new Guardians of the Globe, and the Teen Team. Mark saves Eve from a Flaxan blast and Rex Sloan reminds him that Eve is with him and not Mark, much to his frustration. Mark arrives him with his mother asking if he wants to talk. Mark says that he's exhausted and goes to his room. He begins crying and the mysterious entity that put him back in time appears. It speaks to him and says that he has undone much death and asks why Mark is said. He reveals that he doesn't like his old life. The entity reveals that Mark altering prevented Eve from finding out about Rex's affair with Kate Cha. The entity goes on to say that Mark was chosen by them for his selflessness and influence on others to save the universe he is in, but Mark has the choice to go back to his original universe.

Mark wants to go back, shocking the entity. He goes to say that Terra would not exist in the universe he is in currently and that would mean essentially killing his daughter. The entity is baffled that Mark would chose one life over thousands of others andoffers Mark one last chance to stay, and he says "no." The entity calls him a disgrace and that he has doomed that reality. Mark returns to his original reality and gets out of the cave he was previously in.

He sees that the spaceship from Talescria is wrecked and rushes back to Talescria. He finds Eve on the balcony and calls out to her. She is shocked by his appearance and Mark explains where he was, much to her surprise. He reveals that he was gone for weeks and that he made the choice of Terra Grayson over thousands of other people. He asks to see Terra. He becomes happy, but starts crying after he realizes that Terra is much older than before, meaning that he had missed years of her childhood.

REBOOT? part three! CONCLUSION! Invincible’s world comes crashing down around him leaving him with the same question we all have... where do we go from here?

Retrieved from "https://imagecomics.fandom.com/wiki/Invincible_Vol_1_126?oldid=62975"
Community content is available under CC-BY-SA unless otherwise noted.