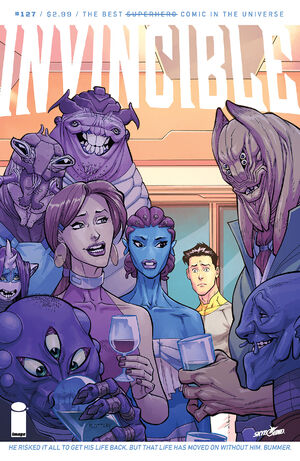 Mark is still crying after realizing that Terra is five years old, meaning that his "reboot" adventure took place over the course of a few weeks in the past, but five whole years in the present. Mark sobs and apologizes to Terra for not spending time with her or teaching her things. Eve starts crying as well. Terra, ecstatic to finally have met her dad, forgives him, and the two embrace. Eve, still in shock over Mark's return, continues to cry, and Mark apologizes to her as well. The three of them have a long group hug as a family.

Terra later falls asleep, and Eve says it took her longer than usual tonight. Eve and Mark sit on the couch in their home and Eve asks what happened to Mark in the past. Mark tells Eve that he's not a hero, that he could have undone the deaths caused by the fight with his father, Dinosaurus obliterating Las Vegas, Rex taking over the world, and more. Mark says he could have saved "Everyone", referencing important individuals who have died. Eve understands that he had to choose Terra over anything, and Mark breaks down again. Eve says that they will work on their relationship as well, but she looks distracted while saying it.

As Mark and Eve walk Terra to school, Eve reveals that she has gotten used to living here, with saying hi to locals and walking normally. Terra runs inside her classroom once she sees her teacher, Miss Lukka, who tells Terra that her friend Polly is inside. Eve introduces Mark to the teacher. Later, at the Coalition of Planets building, Allen practically chokes Mark by hugging him so tightly. Mark gets right down to business and tells Allen that after he returned, Thraxa looked devastated. Allen tells him that Thragg is still on the loose, and that they have lost many fights and many lives. Apparently Oliver had an incident years ago, but is fine now and back on active duty. Allen asks more about the cave, and Mark says that he should send a team over to investigate, because he is not going back to that planet.

Allen reminds Mark that he could still be helpful in the war against Thragg, but Mark refuses his offer, saying he will never fight this war again. Allen begs him to reconsider, and Mark points out that he missed five years with Eve and Terra, and that the Coalition has been fighting Thragg for five years and is still around. Eve tells Allen that they are moving to another planet called Khulthak. Allen apologizes to the couple and says that he understands. That night, Mark and Eve go to a party and meet up with Allen and Telia. Eve finds Haluma with her and Oliver's twins, and apparently the two are close friends now. Mark spies Oliver on the balcony and goes to speak with him, but when Oliver turns around he is wearing a standard Viltrumite mustache, and his skin looks completely human. Oliver asks how Mark is holding up, and Mark breaks down again. Oliver reminds him that he went through a lot, but that he now seems very pusillanimous.

The next day, Eve and Mark pick Terra up early from school to leave the planet. Miss Lukka says she understands, and gives Terra an educational robot unit so she can catch up on her studies. Terra names the robot "Eddy". Terra cheers when she sees that their ship is now in Space. That night, Mark wakes up to find that Eve has left their bed and is sleeping in another part of the ship, alone. Arriving on Khulthak, Terra takes Eddy to pick flowers, while Eddy prepares a botany lesson. Eve shows Mark a modern home which she built herself. Eve tells Mark that this a secluded, breathable planet. Mark attempts to kiss Eve for the first time since his return, but she pushes him away. Mark apologizes, but Eve tells him that it is not his fault. She says that while Mark was gone, she saw "Someone Else".

That night, back on Talescria, while Haluma is preparing her kids for bed, Oliver tells her that he needs to check in for the night. Oliver opens up a laptop and reports that there is no activity, and that Invincible has indeed returned but is on vacation. Oliver reports that Invincible may no longer be a threat again, and Thragg, on the other side with his wives and now teenage children on Thraxa, and still wearing Battle Beast as a cape, says that they will soon find out if Oliver is right.

NEW STORY ARC Mark has returned from the past… to a very different future. Now he has to pick up the pieces of his life and try to put them back together. INVINCIBLE co-creator CORY WALKER returns to the book to set the stage for the next chapter of Invincible’s life!

Retrieved from "https://imagecomics.fandom.com/wiki/Invincible_Vol_1_127?oldid=62610"
Community content is available under CC-BY-SA unless otherwise noted.