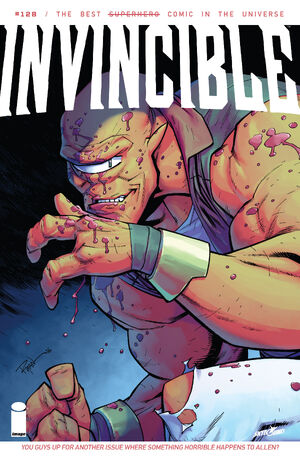 Then you're an optinal robot! I picked a flower for you!

While two aliens are discussing the politics of Allen being leader, Thragg's daughter, Ursaal, destroys one of their buildings. She reports back to her father so that can they initiate their invasion.

Meanwhile, Mark and Eve continue their off world vacation. She reveals the name of the man she was with while Mark was gone. Though saddened by it, Mark understands as he was gone for a long time. Mark assures her that he loves her. Terra plays with her AI and she later asks Mark to fly her, which scares her. He flies lower and she enjoys.

Later that night, Allen shares an intimate moment with Telia, though he doesn't pay attention because of her worry about the city of Krall. While she argues with him, he gets a call of emergency from the council. He rushes out to see what it about.

Mark and Eve get back to their house and they all read together after she finishes coloring.

Allen walks into the Coalition capital and it is revealed that it was really an ambush and that the emergency was falsified. Elia, the perpetrator, reveals herself. She states that Allen failed as a leader as she says that they should have used Mark and Oliver to breed Viltrumite hybrids to build their ranks. Allen manages to kill his attacker before he gets to Elia. Elia states that she is prepared to die and commits suicide, hoping to take Allen with her. Allen manages to survive in regret, but not without sustaining major injury.

Eve looks at Mark, realizing he's upset about the man she was with. Eve mentions that she hasn't heard from Earth in a long time. Mark assures her that it's probably nothing, not knowing that the Earth's superheroes are battling some unknown threat.

Allen the Alien is under attack. Has Mark’s absence put all his friends and family in danger? Will he be able to put things right before it’s too late?

Retrieved from "https://imagecomics.fandom.com/wiki/Invincible_Vol_1_128?oldid=62972"
Community content is available under CC-BY-SA unless otherwise noted.