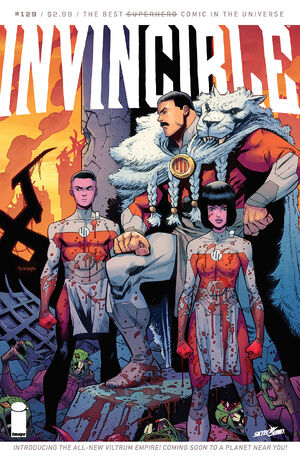 Rex and Nolan manage to subdue the Technicans. Rex asks that Nolan kill him so that he can achieve world peace. Nolan obeys and Rex thanks him. Nolan comments that he is a good friend, revealing that Rex and Nolan became friends over the five years.

Meanwhile in Talescria, Allen begins healing from his injuries while Mark, Oliver, Eve, and Haluma visit. Allen assures that he will be okay and he reveals that he was betrayed by Elia. Telia arrives with her brother, Kubian, Eve's former lover. After Eve sees him, she leaves with Mark realizing who he was. Kubian goes after her and asks that she talks with him. He tells her that she should live for her and that he made her happier did. She punches him before he could finish his statement.Terra tells Oliver the story and Oliver encourages it. Eve and Kubian finally talk about it. Telia mentions that she loved Kubian but Terra was in the way and their species' impatience for children prevented it. Oliver comforts Mark and he says his goodbyes before he leaves for Earth.

Allen heals while Telia tells him about Eve going out of control. In a few days, Allen finishes healing, showing his has gotten stronger from his near death experience. Oliver informs him that Thragg has increased his galactic control, worrying Allen.

On another planet, Thragg's son, Onann begins killing the conquered race of people without mercy. He and Ursaal get into a dispute and Thragg arrives. She assures him that there is no problem.

Nolan arrives back to his moon house, and sees that Mark and his family are there. Nolan hugs Mark and sees his granddaughter. A disappointed Mark asks why Nolan is friends with Mark. While Nolan tries to explain, the alarm on the Warship goes off. After seeing Anissa is attacked by Eve, Mark and Nolan break up the fight. Eve says that he shouldn't forgive her for what "she's done." [1]. Nolan grabs Anissa by the throat and demands to know what happened. Mark lies and says nothing happened, much to his sorrow. Nolan releases her and tells her to leave.

Mark talks with Eve about the situation and he asks that Nolan not know about it. He states that he doesn't want anything to get into the way.

Anissa heads back home to her husband and daughter. Anissa asks her husband Scott if "he" is awake, referencing someone. It is revealed that Anissa has a son named Marky, who looks a lot like Mark Grayson.

Retrieved from "https://imagecomics.fandom.com/wiki/Invincible_Vol_1_129?oldid=63621"
Community content is available under CC-BY-SA unless otherwise noted.